I typically use a tortilla press, but this time I cooked half of the batch of soaked flour tortillas in a skillet to see how they would turn out. They were much thicker and smaller than the pressed version, but still very good. If you plan on using a skillet I recommend doubling the recipe so you can have nice, large soaked flour tortillas. Otherwise they are about the size of small pancakes.

Note: The press we use is similar to this one. It’s the only piece of kitchen equipment we own that has Teflon on it (the black pan in the photo below is a cast iron skillet). It’s not ideal, but it was free. I hope to upgrade to a cast iron one soon. 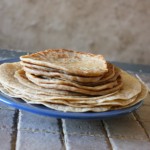 Prev Post How to Potty Train in 3 Days
Next Post Snippity Snip – Or is circumcision that simple?