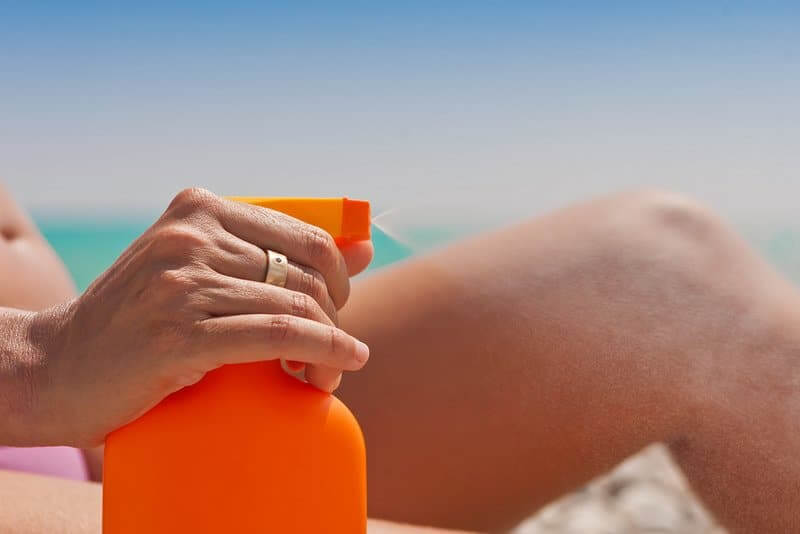 It may be hard to tell, given my mystery-ingredient spattered shirt and 3 day ponytail, but I actually care about the way I look. Okay, maybe not TODAY, but at least on Sundays, holidays, my wedding anniversary, annnnnnd a few days in between. What can I say? I want my husband to look at me and say “wow” every once in awhile.

Back when I gave up daily sunscreen use I confess I wondered if I’d look like a wrinkly prune in 20 years. Turns out, I probably did myself a favor.

Many of the new generation of sunscreens – and this includes almost all “healthy” mineral sunscreens listed by the Environmental Working Group – contain titanium and/or zinc nano particles.

Because these minerals are non-toxic in their natural forms it was assumed these mini-sized versions would be equally safe. That was probably a bad idea. Here’s why:

Are you suddenly feeling the urge to shout “Sunshine! Roses!“???? I’m sorry, talking about this stuff isn’t fun for me either. This post actually started out as a post on sunscreen recommendations, but I was so surprised by all the problems with the “healthy” ones that I felt it deserved a post. Fortunately, there is at least one I can wholeheartedly recommend. I’ll be sharing it with you tomorrow along with my recipe for homemade sunscreen.

But first, how about one more surprising fact you won’t find on the label?

Sunscreens Protect From Only 4% Of The Spectrum

That’s right, four percent – and that’s the “full-spectrum” ones! And now that the chemicals used to filter UVA rays are under intense scrutiny manufacturers are turning to nanoparticles and labeling their products as “natural” mineral sunscreens. Like their more bulky parent versions, these particles are far more effective at blocking UVA (long rays that penetrate deep into the skin) in addition to UVB rays (which interact with the skin to form Vitamin D) than most synthetics.

This is not as impressive as it sounds, though, because there are currently no mineral or chemical sunscreens that are effective at filtering Infrared Radiation (IR), which is a huge part of what we are exposed to:

The thing about this is that historically, redness and swelling (a sunburn) used to be our bodies way of letting us know we needed to spend more time in the shade. Sun is good, but like most things moderation is key. Problem is, now that we can prevent sunburns with UVB filters some experts believe that we have disabled the alarm that’s supposed to tell us when we’ve had enough.

Personally, I like my alarm to function so I try to get my sunscreen through food and go inside before I burn. However, there are times when that’s just not possible (Or desirable. Hello Cabo San Lucas!). On those days I definitely cover up or use sunscreen. But instead of eating junk food because I’m “on vacation” I keep up a nutrient-dense diet because – YAY! – researchers think antioxidants are our best defense against IR radiation.¹ The sunscreen recipe I’ll be sharing tomorrow contains two antioxidant powerhouses for this very reason.