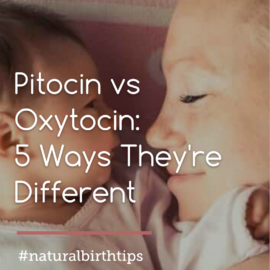 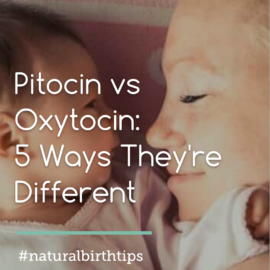 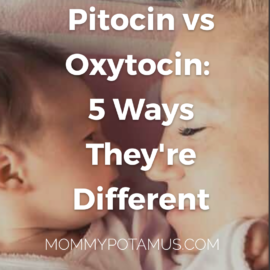 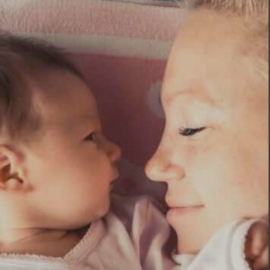 Inside: Five differences between oxytocin and its synthetic version – Pitocin – that may affect how we experience labor, birth, and bonding.

We often call it The Love Hormone, but did you know that oxytocin literally means “quick birth”? Yep, it’s true. (1)

Although we later discovered that it does a lot of beautiful things – strengthen emotional bonds, facilitate trust and reduce the effects of stress, for example – oxytocin was named when the only thing we really understood about it was that it’s essential for birth.

Now, chemically speaking oxytocin and its synthetic equivalent – Pitocin – are identical. You’d think that their effects would are identical, too, but actually that’s not the case. There is some overlap, but there are also huge differences.

The Difference Between Oxytocin and Pitocin

Let’s start with what they have in common: Both oxytocin and Pitocin stimulate contractions during labor and get mama’s milk flowing after the baby is born.

Oxytocin also helps the uterus contract after birth and controls bleeding. Pitocin is sometimes used to control bleeding as well, however it’s important to note that when Pitocin is given before the third stage of labor (for example, maybe it was given earlier to induce or augment labor), it actually increases the risk of postpartum hemorrhage.

We’ll discuss why below, along with five differences between oxytocin and Pitocin that may affect how we experience labor, birth, and bonding:

Birth is intense. Understatement of the year, right? Fortunately, our bodies help us through it by producing beta-endorphins, which are 18 to 33 times more potent than morphine. (2)

Here’s how it works: When our cranks up oxytocin production in order to intensify contractions, it funnels it into two types of cells. The large cells (magnocellular neurons) flow into the bloodstream, and the small cells (parvocellular neurons) flow into the brain. (3) When oxytocin flows to the brain, a message is sent to the pituitary to increase beta-endorphins as well. This is called The Endorphin Effect, and it’s our bodies way of managing pain naturally.

Unfortunately, when Pitocin is administered via IV it pretty much stays in the bloodstream. In order to get it flow to the brain in meaningful amounts you have to be pretty intentional – either by administering it nasally (because the blood-brain barrier is weaker near the nasal mucosa) or intracerebroventricularly.

Without oxytocin flowing to the brain, the message never gets sent to the pituitary to release beta-endorphins. (3) The pain is fully experienced, but one of the the body’s most powerful coping mechanisms stays dormant.

2. Pitocin Increases The Chance of Needing Other Interventions

Like our breath and our heartbeat, oxytocin has a natural rhythm that pulses throughout our bodies. The ebb and flow creates a rest period between surging contractions, allowing them to be more effective while giving us a little break in-between. The frequency of the pulses increases as labor progresses, usually culminating somewhere around 90 second intervals. (3)

Pitocin, when used to induce labor, tends to create “jackhammer contractions” because it is administered via a continuous drip IV that does not simulate the pulse of natural oxytocin production. These intense contractions can overstimulate the uterus, stress the baby and require interventions such as a cesarean.

Augmented contractions during labor may also exhaust the uterus to the point that it is unable to contract properly after birth, therefore increasing the risk of hemorrhage.

Evidence suggests that women who receive Pitocin have increased risk of postpartum hemorrhage, which is likely due to the prolonged exposure to non-pulsed oxytocin. This makes the oxytocin receptors in her uterus insensitive to oxytocin (“oxytocin resistance”) and her own postpartum oxytocin release ineffective in preventing hemorrhage after birth.” (4)(5)

Mothers who have labored with and without Pitocin usually report that contractions augmented by Pitocin are much more painful, which may be due to increased intensity of contractions and low levels of beta-endorphins.

3. Oxytocin Flows Only When The Cervix Is Ready

Although it’s not as well-known, it facilitates bonding, trust, stress relief and  . . . softening of the cervix. Yep, oxytocin – along with other hormones – “contributes to the relaxation of the cervix and thereby to the opening of the birth canal.” (3)

When contractions start flowing naturally, you know it’s because the cervix is ready.

Pitocin, on the other hand, doesn’t contribute to softening in the same way before contractions start picking up. If it’s used in the absence of a ripe or favorable cervix, the chance of needing a cesarean increases significantly. (6)

Why is Pitocin less effective at dilating the cervix than naturally occurring oxytocin? We don’t fully understand the process of dilation, but some experts believe that it’s a result of oxytocin in the bloodstream (which stimulates contractions to help open the cervix) working with oxytocin in the brain (which may orchestrate the flow of other processes that help with dilation just like it triggers beta-endorphins to help with pain).

When oxytocin flows to the brain, it activates the calm and connection response (along with beta-endorphins for pain) to help relax the cervix. When that happens, the outer and inner muscles work in harmony to open.

Just before a baby is born the mama’s production of oxytocin peaks, flooding her system with the love hormone. There are several benefits to this surge, which unfortunately doesn’t occur with synthetic Pitocin. (Remember, it’s a constant-drip IV.)

1. The peak can sometimes trigger the Ferguson Reflex, also called the fetal ejection reflex, in which the baby is born easily and quickly without voluntary pushing from the mother. (I experienced this with one of my three births.)

2. The extra oxytocin sends signals for the uterus to contract and release the placenta, which is needed to prevent excessive blood loss. (One risk with Pitocin is that it sometimes exhausts the uterus to the point that it cannot contract well at this point, thus increasing the risk of hemorrhaging.)

3. Best of all, the “Love Hormone” remains very high during the first hour after birth, which allows mama to bond with her baby. Later in this post we’ll discuss ways to keep the oxytocin flowing after that.

5. Oxytocin Acts As “The Bonding Hormone”

Every mama who has ever inhaled the sweet smell of her baby knows the power of oxytocin, which is particularly active in the days and weeks after a baby is born.

During the first hour after birth, which is often called the Golden Hour, mama and baby are primed to bond with each other. High levels of oxytocin heighten the mother’s senses, causing her to relish her baby’s sweet scent, cries and tiny fingers.

Babies also release oxytocin during this time and begin to recognize the unique scent of mama’s breast milk. (7) Over the days and weeks, the bond continues to deepen, and by three months mama and baby can synchronize their heartbeats just by smiling at each other.

Unfortunately, the amount of oxytocin a mama secretes in the days following birth is reduced when Pitocin is used during labor. This study found that the higher the dose of Pitocin, the lower the production of natural oxytocin. On the flipside, a very small amount of Pitocin – sometimes called a “hit of Pit” – has a much smaller impact.

Two important notes: First, if for whatever reason Pitocin is needed or the first hour of birth isn’t all about snuggling and bonding, there are ways to increase oxytocin naturally after baby is born. More later in this post.

Second, every birth is unique and every mama and baby bond on their own schedule in their own way. If you don’t feel a deep connection right away, that’s okay. As my friend Genevieve, author of The Mama Natural Week-by-Week Guide to Pregnancy and Childbirth, writes:

here’s something else you won’t hear many mamas admit to: for some women, that all-encompassing, I-would-die-for-you kind of love just doesn’t kick in right away. It may take days (or even a few short weeks) before the floodgates open. And that’s fine, too.”

What are the benefits of Pitocin?

It’s important to point out that Pitocin does have its uses. When administered conservatively, it can give a woman whose labor has stalled just the boost she needs. It may even prevent the need for additional, more invasive interventions.” – Genevieve Howland, The Mama Natural Week-by-Week Guide to Pregnancy and Childbirth

When medically necessary, Pitocin can improve outcomes for mama and baby. In addition to helping in the way Genevieve describes above, there are times when induction is necessary due to preeclampsia, low amniotic fluid, or another reason.

There are also times where it can be helpful for controlling bleeding after birth, which is why many midwives carry it in their birth kits.

Is it possible to boost oxytocin naturally?

Yes, there are many ways to optimize the production of oxytocin before, during and after baby is born. Post coming soon!

Want to learn how to have an awesome birth without leaving your couch?

If you’re looking for an evidence-based, naturally-minded resource, I highly recommend the Mama Natural Birth Course and/or The Mama Natural Week-by-Week Guide to Pregnancy and Childbirth.

Citations for this article:

5. Mansy, Amr. (2017) Does Labor Augmentation with Oxytocin Increase the Risk of Postpartum
Hemorrhage? A Randomized Controlled Trial. Retrieved from https://www.longdom.org/open-access/does-labor-augmentation-with-oxytocin-increase-the-risk-of-postpartumhemorrhage-a-randomized-controlled-trial-2090-7214-1000268.pdf

7. Nshitani, S. The calming effect of a maternal breast milk odor on the human newborn infant. Retrieved from https://www.ncbi.nlm.nih.gov/pubmed/19010360