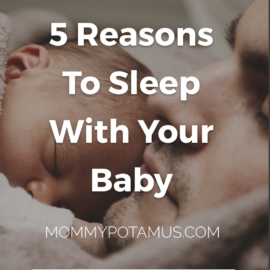 Is Co-Sleeping As Dangerous As Putting Your Baby To Bed With A Butcher Knife?

The Milkwaukee Health Department thinks so, and last year they launched a controversial campaign to let the world know. “Bedsharing is dangerous,” says Anna Benton, Maternal and Child Health Division Manager for the City of Milwaukee. “We don’t think there’s any debate. We don’t think there is a quote un-quote safe way to share a bed with your baby.” (source, emphasis mine)

How sad, especially considering that . . .

A few years ago, it became apparent who was behind the curious disinformation campaigns about cosleeping. In May 2002, the Consumer Product Safety Commission (CPSC) released a weakly supported announcement purporting the dangers of cosleeping.

Interestingly, the announcement was sponsored by the Juvenile Products Manufacturers Association (JPMA) – in other words, the crib industry. The crib industry went further by providing “Safe Sleep” brochures to Toys ‘R Us and other venues, creating a video clip for wide media distribution, and granting continued “education” on the topic to doctors.

…Despite the 2002 CPSC statement about cosleeping “dangers,” the American Academy of Pediatrics (AAP) continued to support safe cosleeping. But now, with encouragement from SIDS organizations that are backed by pacifier and formula company funding, the AAP seems to have joined the anti-cosleeping bandwagon – and has begun plugging pacifier use, as well.

Now, I Could Go On All Day…

About ridiculous studies and the industries they serve: like the recent Standford report which claimed organic and conventional produce are basically no different (funded by biotech firms like Monsanto, of course!) Instead, though, let’s examine what independent research really says, and by all means let’s use precise definitions rather than jumbling a variety of practices together like these so-called research endeavors do.

Co-sleeping is sharing a sleep environment with your baby. This may be by sharing your bed safely, having a sidecar arrangement next to the bed or even having a crib in the room that is within arm’s reach. It is the cultural norm for 90% of the world’s population (source)

Co-sleeping should NOT occur in unsafe environments, such as couches and waterbeds. These types of arrangements are often included in studies about co-sleeping dangers, which dramatically skews the results. Also, co-sleeping is not putting baby in a bed with an adult other than mama, who is biologically hardwired for sharing sleep with an infant (research indicates that some dads change their sleep patterns over the course of a few months to become more aware as well).

Now, with that said, if you WANT to co-sleep with your baby here are five reasons to tell the Milwaukee Department of Health where to put their campaign:

Reason #1: Your Baby’s Heart Goes Pitter-Patter Over You

Babies and their mothers share a deeply physiological connection. In one study of infant reaction to mothers, fathers, and strangers, an infant girl was brought into a lab and set in a plastic seat that was curtained off from distractions. The baby was then approached by her mother, then her father, and then a stranger.

The data suggests that babies and their caretakers are entwined in a homeostatic relationship, with the baby clicking in with the parents to achieve some sort of balance.”

Our Babies, Ourselves, p. 38 (emphasis mine)

Isn’t that amazing? And it just gets better: “Babies who sleep close to their mothers enjoy ‘protective arousal,’ a state of sleep that enables them to more easily awaken if their health is in danger, such as breathing difficulties’, says this article, which adds that “Infants who sleep near to parents have more stable temperatures, regular heart rhythms, and fewer long pauses in breathing compared to babies who sleep alone. This means baby sleeps physiologically safer.”

Reason #2: You Keep Your Baby Safe

On the flipside, mothers are deeply tuned in with their babies, often to the point where sleep cycles are synchronized so closely that they will naturally transition within a few seconds of each other. If something happens, the mother can act quickly on her baby’s behalf. According to the same article:

Trusted research by Dr. James McKenna, Director of the Mother-Baby Sleep Laboratory of the University of Notre Dame, showed that mothers and babies who sleep close to each other enjoy similar protective sleep patterns [as Asian cultures, which co-sleep and have the lowest SIDS rates known]. Mothers enjoy a heightened awareness of their baby’s presence, what I call a ‘nighttime sleep harmony,’ that protects baby. The co-sleeping mother is more aware if her baby’s well-being is in danger.”

For more on how sleep sharing improves infant breathing and reduces the risk of SIDS, check out this article from Dr. Sears.

Bedsharing babies nurse about twice as often as those who sleep alone, which is beneficial for helping mamas maintain their milk supply, suppressing ovulation, and helping a baby who s on the small side gain weight. Best of all, though, you don’t have to get up several times a night to nurse. As someone who has breastfed while bedsharing and also gotten up to nurse a baby throughout the night (he was in bed with me but could not nurse lying down due to a tongue-tie), I can say definitively that getting up to breastfeed throughout the night is FAR more exhausting. This, of  course, leads to . . .

Reason #4: You Get More Sleep

Which in my book is what makes #4 so awesome! And it’s not just my experience – researchers at the College of Nursing at East Tennessee State University found that although breastfed babies sleep less than their formula-fed counterparts, their mothers actually sleep more! (source)

However, there **is** a tradeoff. You get more sleep, but it’s in a lighter state than if you were sleeping alone. The same goes for your baby, too, and there’s a good reason why:

Babies who sleep with their mothers and breastfeed spend less time in the deepest  stages of sleep. Light stage sleep is thought to be physiologically more appropriate and safer for babies, because it is easier to awaken to terminate apneas (episodes where one stops breathing), than it is when babies are in deeper stages of sleep. The mother’s movements and the smells of mother’s breast milk nearby both contribute to the baby remaining in lighter sleep for longer periods of time.”

~ An Overview of The Benefits of Co-Sleeping

In other words, being a “good sleeper” is not always in the best interest of young babies – checking in often and establishing good breathing patterns is!

Don’t tell CNN, though, because obviously any aspect of parenting you manage to enjoy means you are really doing it for **you.**

Just between you and me, though, I absolutely love that my first memory from this morning is my son schooching up to kiss me on my eye and then wrestle me into a cuddle.

One Surprising Reason NOT To Bedshare

While all major organizations agree that room-sharing arrangements are beneficial and may even reduce the risk of SIDS by half, there is no consensus when it comes to bedsharing. The American Academy of Pediatrics says never ever while UNICEF and the World Health Organization give the thumbs up.

Who should we believe? According to Dr. James McKenna, head of the University of Notre Dame’s Mother-Baby Behavioral Sleep Laboratory, “Bedsharing . . . can be made either safe or unsafe, but it is not intrinsically one nor the other.”

So what makes bedsharing unsafe? Here are some of the excluding criteria most experts agree on: “Obese parents; parents who smoke (either during pregnancy or at present); parents sleeping on a waterbed, recliner, sofa, armchair, couch or bean bag; parents who sleep on multiple pillows, a sagging mattress or a sheepskin or use heavy bedding, such as comforters or duvets; sleeping in overheated rooms; parents under the influence of drugs or alcohol; other children or pets who can or are likely to climb into the bed; and stuffed animals on the bed that could cover the baby’s face.” (source)

And then there’s one that took me completely by surprise: formula feeding. Now y’all, please believe me when I say this is not a jab at mothers who can’t or don’t breastfeed. I’ve had my own share of struggles when it comes to breastfeeding and I’m just not going there.

With that said, evidence suggests that formula feeding disrupts the biological feedback loop between mother and baby in two ways:

Breastfed babies instinctually stay close to their mothers at night. The smell of their mothers milk serves as a homing beacon that keeps them from roaming around and getting stuck.

According to this article, “Data from Consumer Product Safety Commission indicate that the greatest risks to a baby sleeping in a bed with an adult is not, as many would assume, from an adult overlaying or rolling over onto the baby, but from the infant strangling or becoming wedged or trapped between a wall, a piece of furniture, the bed frame, headboard or footboard and the mattress.”

The second factor is that formula-fed babies tend to sleep more deeply and wake less often. Because the sleep patterns of mothers often synchronizes with the baby’s this can lead to decreased awareness of one another in the sleep environment. For these reasons Dr. McKenna strongly recommends co-sleeping with a sidecar/nearby crib arrangement but not “bedsharing”.

So How Do I Know If I’m Bedsharing Safely?

Do you co-sleep? Why or why not?