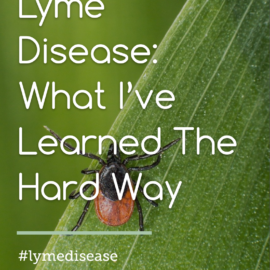 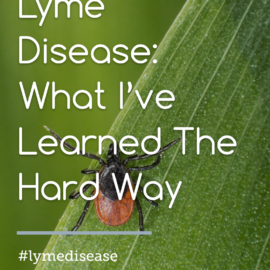 Several years ago, I thought I knew two things about Lyme disease:

Today I know more about it than I ever would have imagined, both from a diagnostic/treatment standpoint and the impact it can have on a family . . . mine.

When my family moved from Texas to a little neighborhood near Nashville*, I had no idea that the perfectly manicured, suburban lawn we played tag on would change our lives.

Ticks were not common where I grew up, so late one afternoon when I found a tick on myself and one of my kids I freaked out, went immediately to the CDC website, and searched to see if Lyme disease had been reported in the area.

I exhaled, not knowing that Lyme disease is vastly underreported due to lack of awareness and inadequate testing methods.

My husband was also bitten around the same time and didn’t think much of it. Like me, he thought he was safe because the tick hadn’t been attached long.

The CDC current stance is that “In most cases, the tick must be attached for 36-48 hours or more before the Lyme disease bacterium can be transmitted.” (2) However, according to this study, “the minimum attachment time for transmission of infection has never been established.”

It was once assumed that ticks couldn’t transmit Lyme until they’d fed for a long time – the rationale was that when they are very full they regurgitate some of the contents of their stomach into the host, including the Borrelia burgdorferi bacteria that causes Lyme.

However, what we now know is that Borrelia burgdorferi can be found in tick salivary glands, not just their stomachs, making rapid transmission more possible. Also, if a tick has fed partially on another host before attaching to someone, it can accelerate the rate of transmission.

Mechanisms for early transmission of spirochetes have been proposed based on their presence in different organs of the tick. Studies have found systemic infection and the presence of spirochetes in the tick salivary glands prior to feeding, which could result in cases of rapid transmission. Also, there is evidence that spirochete transmission times and virulence depend upon the tick and Borrelia species. These factors support anecdotal evidence that Borrelia infection can occur in humans within a short time after tick attachment.” (3)

Other tick-borne illnesses are known to be transmitted in as little as ten minutes. (3)

It’s also important to note that “Most people never notice the tick that gave them Lyme disease.” Ticks in the nymph stage can be as small as a poppy seed, and “UC Berkeley entomologist Robert Lane reports that one of his team of researchers was fed upon by infected nymphal ticks for at least 1-2 days after exposure to tick-infested habitat, despite ‘extreme personal preventive measures.’ He advises people who work or recreate in endemic areas to check themselves frequently and carefully for several days following exposure since unfed nymphs are very difficult to spot and may be easier to detect when partially replete.” (4) (emphasis mine)

A few years after those original bites, my husband began struggling to remember things and developed severe joint and muscle pain. We went to a local functional medicine practitioner to try to figure out why.

My gut said it had something to do with the tick bites, but the practitioner thought otherwise. It took awhile to find someone who didn’t just run the two conventional tests – Western Blot test and the ELISA test –  which often fail to deliver accurate results. Even when both are performed together, 44 out of every 100 cases are missed. (5) (6)

He eventually did get proper testing, though, which came back positive for not just Lyme but several other tick-borne infections. At that point, we opted to test our entire family and I came back positive as well as one of my three children.

My husband definitely had symptoms and my child had started reporting frequent stomach aches that didn’t resolve with our usual natural remedies, so I immediately began researching healing protocols for them.

Because I wasn’t having any symptoms at all, the doctor who ordered our tests said my immune system was strong and had likely taken care of it. I’ve learned the hard way that Lyme can stay in stealth mode for a long time until it finds a weakness to exploit. Eventually it found mine, which turned out to be related to a genetic mutation I didn’t know I had and a procedure that was done while I was in junior high. (More on those later, too.)

Because I wasn’t experiencing any symptoms, I did one round of UVLRx (a natural, complementary medicine therapy offered by the M.D. we were working with) along with an herbal protocol “just in case.” Really, though, I mostly focused my efforts on my family.

If we haven’t had the chance to meet in person (yet!), here’s something you need to know about me: When I get together with close friends for any length of time – a multi-family trip, for example – it’s never considered over until I cry.

Because I ALWAYS CRY. Happy tears. Sad tears. Empathy tears. Tears because I’ve laughed until it literally hurts. When it comes to health I’m a “show me the data” and “I’ll just hop over to PubMed” kind of girl, but when it comes to relationships I’m all about connection. And crying, apparently.

Except when I’m processing something really difficult.

You see, I pushed my last baby out without my midwives – who were just a few feet away – even realizing I’d hit the transition phase of labor. Most people moan or grunt communicate in some way, but when I’m working through something hard – labor and otherwise – I don’t make a sound. I just focus on finding every ounce of strength I have to do what I need to do.

That’s what I did with my family. When it came to them, I focused first on seeing them through and then planned to share our journey with you. Today they’re both considered fully recovered by their Lyme-literate doctor based on their lab results – a victory that they’ve been celebrating for over two years now.

Unfortunately, just when I felt ready to share our journey with you – with my family’s blessing, of course – I began experiencing symptoms that my doctor and I eventually figured out were related to Lyme. My symptoms and recovery have been completely different than my husband and child’s, and it taught me that there’s no one-size-fits-all approach to Lyme that fits for everyone.

For me, everything started when one non-standard test came back out of range, and I immediately started therapies for the most likely causes. Now, one thing to know about stealth infections like Lyme (and many viruses) is that they don’t really like it when you find them. When I started addressing things head-on, it felt like I woke a sleeping giant. I am still trying to find the words to describe what that experience was like.

Maybe you think waiting to share makes me inauthentic, but I agree with Brené Brown, who wrote in one of her many books (I wish I could remember which one) that sharing our stories on a public level when they are still very raw is not brave or vulnerable in a healthy way. I needed to own my story before I could share it with you. I needed to gather my strength to do hard things, not be distracted by negative or hurtful comments.

After not publishing much on the blog because I was focused on healing, I’m writing more often again. Some of what I share – like a recent article on cellulite – may not seem directly related, but it usually is. (For example, I learned a lot about cellulite while diving deep into lymphatic health.) If my articles sometimes seem too playful or lighthearted given what I’ve shared, know this: I won’t waste one drop of love or joy that finds it’s way into my life.

I’ve learned so much that I hope will be valuable to you or to someone you love. I know intimately the pain so many of you feel, and I wish I could hug every one of you and tell you that you are not alone.

More specific blog posts about Lyme and other topics (plus usual subjects like herbs) are in the works, but first I wanted to share this story with you and hear your questions and thoughts. As always, thank you for reading.

* We no longer live in the Nashville area.

6. Bustle.com – “If You’re Testing for Lyme Disease, Here’s What You Should Know.