Can a 3,000 year old Ayurvedic practice whiten your teeth, reduce bad breath, detox your body and make unicorns appear? I haven’t been able to find studies to support all of those claims (though I’m really holding out for the unicorn one), but there is scientific evidence that coconut oil pulling may:

We’ll dive into the details in just a moment, but first I want to mention that none of these statements have been evaluated by the FDA, this article is not medical advice, and it is not meant to diagnose or treat any condition. Now that we’ve got that out of the way, let’s dive in.

What is oil pulling?

Hippocrates once said that “All disease begins in the gut,” but we don’t usually give much thought to where the gut starts – the mouth. As ethnopharmacologist Cass Nelson-Dooley puts it in this fascinating interview:

There are hundreds of microorganisms living in our mouths. Many of them are friendly – like this strain that supports ear, nose and throat health. Others . . . not so much.

The bacteria that make up our oral microbiome – both good and bad – form biofilms on our teeth and gums called plaque. A little plaque is normal, but excessive plaque buildup can lead to problems including gum inflammation, bad breath and tooth decay.

Also known as“kavala” or “gundusha,” traditional Ayurvedic oil pulling involves swishing or “pulling” about a tablespoon of oil throughout your mouth for 20 minutes or so. It’s usually done on an empty stomach and there are a few other details that you need to know before getting started – which I’ll cover in a step-by-step guide below – but here’s how it helps with biofilms:

The Problem With Antibacterial Mouthwash

That’s a problem, because we swallow about one trillion bacteria everyday – a process that is “continuously seeding the gastrointestinal tract with bacteria.” (2) For example:

H. pylori can be a very stubborn infection to get rid of. It turns out that H. pylori lives in dental biofilms in the mouth. When people had dental cleanings, they were less likely to get reinfected with H. pylori. This is just one example of how bacteria in the stomach and gastrointestinal tract are directly influenced by the bacteria in the mouth. When patients have chronic gastrointestinal dysbiosis, it may be originating in the mouth, and they should be evaluated for periodontal disease.” (2)

Unfortunately, the broad-spectrum approach taken by antibacterial mouthwash may exacerbate the issue. According to this article in Scientific American, “wiping out too many of the mouth’s native bacteria” with alcohol-based mouthwashes “could disrupt the usual checks and balances, making way for opportunistic species responsible for gum disease and other infections to move in and take over.”

Oil pulling is an easy, inexpensive way to support a balanced oral microbiome naturally. Here are some of the top benefits:

According to researchers from the Athlone Institute of Technology in Ireland, coconut oil mixed with enzymes that simulate digestion “strongly inhibited the growth of most strains of Streptococcus bacteria including Streptococcus mutans — an acid-producing bacterium that is a major cause of tooth decay.”

Other studies have found that coconut oil works as well as chlorhexidine – an ingredient found in some mouthwashes – and should be explored as a safe alternative. (3) In this one, swishing for just 10 minutes a day significantly reduced Streptococcus mutans within two weeks.

Also, this study found that fatty acids found in virgin coconut oil were helpful for balancing yeast in the mouth.

As I mentioned above, the microorganisms that make up our oral microbiome create biofilms, aka plaque. While a little is normal, excessive plaque buildup can cause something called plaque-induced gingivitis, aka gum inflammation.

In several studies, oil pulling decreased plaque formation after a period of 1-4 weeks (depending on the study). (1)(4)(5)(6)

When excess bacteria are present in the mouth, they release large amounts sulfur compounds that cause halitosis (bad breath). Unfortunately, the usual “fix” recommended for this doesn’t work:

According to many experts, mouthwash does not eliminate bad breath. The mouthwash works at first — killing lots of germs. Then, the bad news. Tierno says that the bad breath you wanted to prevent gets even worse. He says the alcohol content present in many mouthwashes can dry your mouth out. When the saliva glands are dry, they are unable to help wash away bacteria so the stinky stuff flourishes.”

On the flipside, several studies have concluded that regular oil pulling reduces the excess bacteria that contribute to oral malodor without drying out the mouth. (7)(8)(9)

On the flipside, “One study showed that using mouthwash eliminated the beneficial effects of healthy oral bacteria and raised blood pressure.” (2)

Oral health also directly impacts gut health. As mentioned above, we swallow about 1 trillion microbes per day – a process that profoundly impacts our gut microbiome.

While regular brushing, flossing and dental cleanings are the foundation of oral care, oil pulling may be helpful as well. More research is needed to determine whether it has measurable systemic benefits.

People who oil pull regularly often report that it whitens teeth naturally. While no studies have been done to confirm this effect, some do mention it as a likely benefit. (10)

Plaque can make teeth look dingy and yellow, so it’s possible that the ability of oil pulling to decrease plaque formation may be the reason for the perceived whitening effect.

Which oil is best?

The most commonly used oils are:

Most guides to oil pulling suggest brushing your teeth immediately. However, newer recommends often say to brush beforehand so that the anti-inflammatory compounds in the oil are able to maintain longer contact with the mouth after a session.

Personally, I opt to brush and floss before oil pulling.

Tip: Want to simplify your routine and include a healthy, natural whitening ingredient in your oil pulling regimen? Check out this post on making coconut oil pulling chews with teeth whitening turmeric.

Can I add essential oils to my oil pulling routine?

When unfriendly bacteria try to work synergistically together in the mouth, they communicate via quorum sensing. Oils such as clove, cinnamon, spearmint, peppermint and myrrh may promote healthy flora balance in the mouth by regulating quorum sensing. (13)

This Healthy Mouth blend is pre-diluted to 2% and can be used as-is to brush with or added to coconut oil to swish with.

According to this study, “It is contraindicated for children below 5 years due to risk of aspiration,” aka accidentally breathing food or fluid into the lungs. (10) In children over five, they mention that a teaspoon of oil is the most common amount used. Talk with your healthcare provider before incorporating this practice with children.

If I mix a large batch of coconut oil and essential oils, can I store it safely to use later? If so, how?

Yes. As long as it’s fresh when purchased, coconut oil has a shelf life of about two years. Essential oils, on the other hand, tend to oxidize sooner. Make sure to use essential oils that have been purchased relatively recently and are stored properly in a cool area out of direct sunlight. Keep your oil pulling mixture stored into the same conditions (cool area out of direct sunlight) and use within three months. 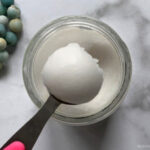 How To Do Oil Pulling With Coconut Oil

Most guides to oil pulling suggest brushing your teeth immediately. However, newer recommends often say to brush beforehand so that the anti-inflammatory compounds in the oil are able to maintain longer contact with the mouth after a session. Personally, I opt to brush and floss before oil pulling.

2. Burhenne, Mark (2020) The Oral Microbiome & Its Impact on Every Other System in the Body