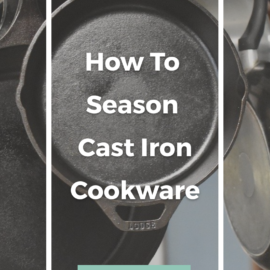 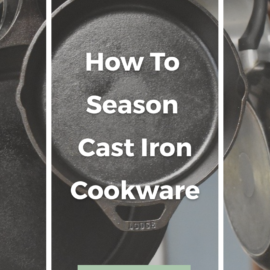 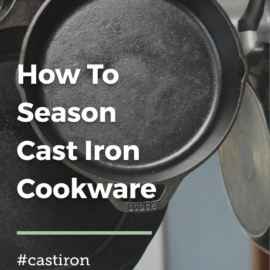 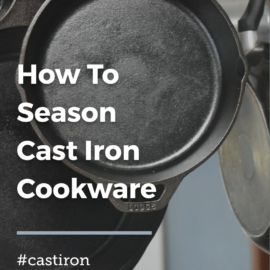 There’s a lot of debate about which fats/oils are best for seasoning cast iron. Some say flaxseed and soy are best, while others prefer to stick to the fats our grandmothers likely used: traditionally rendered lard and tallow.

Personally, I prefer the second approach, but I’ve also added an additional healthy fat – coconut oil – to the list because it is more readily available than in our grandparents time. My beloved Ghi (pronounced “ghee”) would approve, I’m sure.

So, without further ado, I present the much-promised post on seasoning and caring for your cast iron pieces!

How To Season Cast Iron Cookware

Optional Preparation Step #1: If your cookware came pre-seasoned, take a look at the kind of oil that was used. In many cases it will be GMO soybean oil. If you’d like to remove this oil you can scrub the pan using the rust remover instructions below and re-season.

Optional Preparation Step #2:  if your pan is brownish you may want to bake it at 400-450F for an hour prior to seasoning. Some people believe this helps develop a layer of magnetite, an iron oxide which is thought to be protective against corrosion. (source) Over time, cooking on high heat will also transition the pan from brown to black.

1. Using a paper towel, rub coconut oil, lard or tallow all over the inside and outside of the pan. Rub, rub, rub into every nook and cranny! Then take another paper towel and wipe the pan until it looks completely dry.

2. Place pan upside down in a cold oven and place a baking sheet or piece of foil underneath to catch drips. There shouldn’t be any if the pan has been wiped down enough, but just in case! Turn the oven on to 400 – 450F. When it reaches the desired temperature set a timer for 1 hour and allow it to bake. When the hour is complete, turn off the oven but don’t open the door. Allow the pan to cool for a couple of hours before removing.

3. Congratulations, you’ve just seasoned your cast iron pan! If after these steps you find that it is still sticking, repeat the process several more times. (Sometimes 5-6 cycles are needed). Also make sure to use a lot of healthy fats when cooking – that helps, too!

How To Clean Cast Iron Cookware

As you probably know, placing cast iron cookware in the dishwasher or washing with soap/detergent of any kind is a big no-no because it strips the surface. To clean your pan, simply scrub it with a stiff brush and some hot water – easy peasy!

Cast iron is vulnerable to oxidation if not properly seasoned. Other activities, like cooking acidic foods such as tomato and boiling water can also accelerate oxidation. Here’s how to remove rust and restore the protective finish.

The Method:  Cut the potato in half. Dip the cut in in baking soda or salt and rub over rusted surface. If the end of the potato becomes slippery, cut off the tip and re-dip in baking/soda salt. Repeat until rust is completely removed, then immediately re-season the pan to prevent oxidation.

I like this one from Lodge for several reasons. It’s very affordable, made in America, and can go from stovetop to oven to table . . . not to mention the occasional campfire! Oh, and unlike easily chipped Teflon surfaces, cast iron can last several generations.

When your pan is ready, try these cast iron skillet recipes.