After being wrongly accused for generations, lard is finally making a comeback alongside tallow as a healthy, traditional fat.

If you’ve put off rendering your own because you worried it would take oodles of time, I have good news. It’s actually very easy, and today as part of our real food basics series I’m going to show you how.

Curious about the benefits of this under-appreciated fat? Here are my top three:

1. It’s Rich In The “Happiness Vitamin”

Next to cod liver oil, lard is the second richest source of Vitamin D. (1) (2) According to Sally Fallon, author of Nourishing Traditions, one tablespoon of lard obtained from pastured pigs has been found to contain up to 1,100 IU of Vitamin D.

Why is this important? Because as I mention in this article on the benefits of sunshine, ““At least 1,000 different genes governing virtually every tissue in the body.” (3)

Lard is much more affordable than coconut oil, olive oil and other healthy fats, and it can be sustainably accessed in most areas.

“Pigs are easily adaptable animals that can thrive nearly everywhere. Raising pastured hogs is a practice that produces a sustainable source of meat while improving the health of the environment. By rooting and foraging, hogs help to turn over topsoil and naturally fertilize the ground.” (5)

Lard has a high smoke point (370F) that makes it great for frying, and it’s unique composition also makes it a dream to bake with.

Lard is often the “secret” ingredient behind State Fair blue ribbon pies – if you’ve never experienced the light, flaky texture it imparts you need to put it on your bucket list. But maybe you’re wondering . . .

What Kind Of Lard Should I Use?

Great question! Toxins such as antibiotics that are fed to factory-farmed pigs accumulate in their fat stores, so it’s very important to source your pork fat from healthy, pastured animals. Plus, pastured animals have higher Vitamin D stores.

How To Render Lard In A Crock Pot 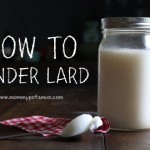 How to Render Lard In A Crockpot

Note: For instructions on how to make lard in the oven instead of the crock pot, follow the instructions in this tutorial on rendering tallow. Just use pork fat instead.
Keyword diy, fat, grease, lard
Prep Time 5 minutes
Crock Pot Time 2 hours
Total Time 2 hours 5 minutes
Calories
Author Heather Dessinger

Step 1: Cut or grind the fat into small pieces

Bonus Step: How To Make Cracklings