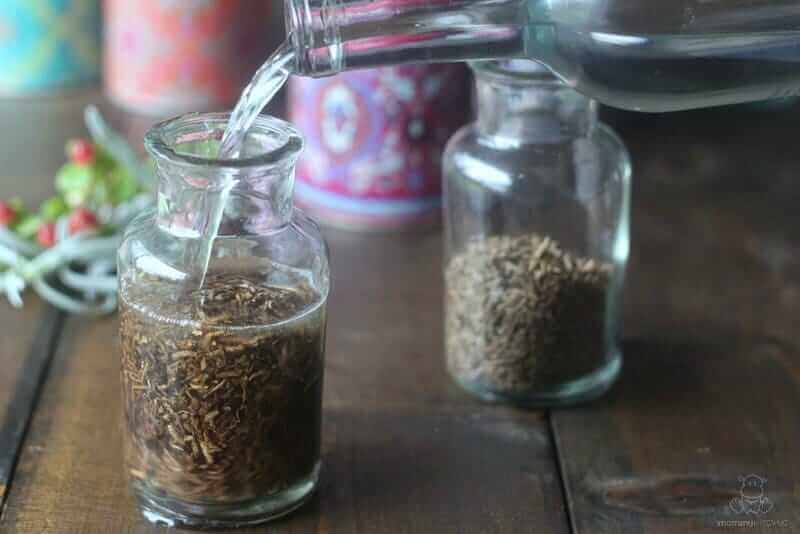 Valerian root has long been used to support relaxation and sleep, but don’t think of it as just a nighttime herb! Many people use it during the day to support emotional well-being, ease discomfort, manage stress and more.

It makes perfect sense when you consider its name is derived from the Latin valere, which means “to be well” or “to be strong.” In fact, during World War II, England’s Vegetable Drug Committee listed valerian root as one of the most essential plants for collection because it was so helpful for relieving stress from the air raids. (1) (2) 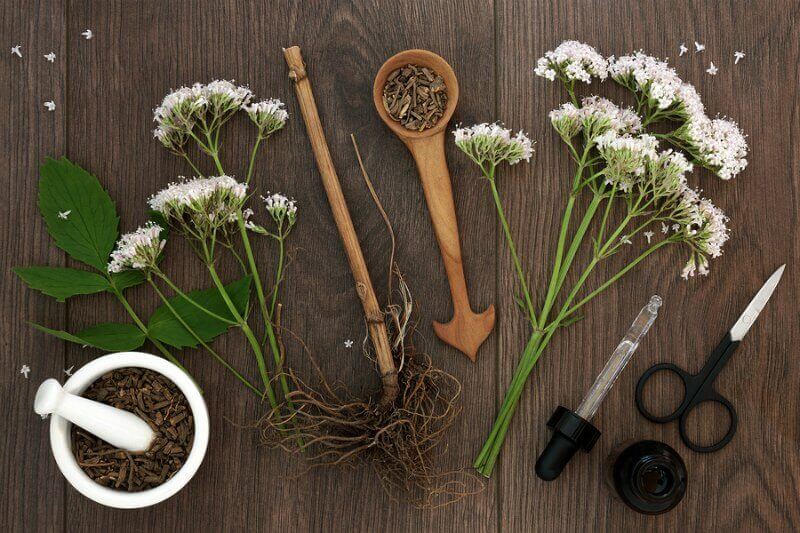 What is valerian root?

Valerian (Valeriana officinalis) is flowering herb that has been used therapeutically since ancient times, when it was recommended by Pliny for pain and other complaints. (3)

Although the sweet smelling flowers have sometimes been used for perfume making, it’s the roots and rhizome (underground stalk) that are used therapeutically. They’re not used for perfume, though, because they smell a bit like sweaty socks. As you can imagine, that’s not really a plus in anyone’s book, so the popularity of valerian despite this downside speaks to how potent it is.

The list of known beneficial compounds has been growing over the past few years so there may still be some that are still undiscovered, but here are the most significant ones we know of so far:

Research suggests that valerian may help with falling asleep, improving overall sleep quality, and increasing the amount of healing slow-wave sleep (deep sleep) that we get. (4)(5)

Valerenic acid – which is a component of valerian root – increases GABA, which is one of the main sedative neurotransmitters. It is associated with improved mood, a sense of calm and tranquility, improved sleep, help with PMS, and calm focus. (6) (7) (8) (9)

According to WebMD, low levels of GABA may be linked to anxiety or mood disorders, epilepsy and chronic pain. (9) Other possible symptoms of low GABA are difficulty unwinding, becoming easily frustrated, feeling overwhelmed, and bowel issues. (10) The conversion of serotonin to melatonin, which is often called “The Sleep Hormone,” is dependent on GABA. (11)

Other supplements that may be helpful for supporting GABA are:

Also, coffee lovers check this out: Coffee works by binding with adenosine receptors in the brain, which control the body’s sleeping and waking rhythms.

Adenosine is considered a “tiredness molecule” that lets us know when we need to rest, and coffee blocks it from being absorbed. A specific lignan – called Lignan 4 – in valerian also binds with the same receptors, but has the opposite effect of coffee. (12)

Valerian also contains the antioxidant linarin, which appears to have calming and sleep-enhancing properties. (13)

Remember how I told you that England prioritized the cultivation of valerian during WWII? That’s because it’s been shown to help with both psychological and physical stress in two ways:

A stressful lifestyle, poor sleep, and other challenging experiences can cause us to burn through our GABA stores quickly. Ideally we’d get a break to replenish levels of this calming neurotransmitter before we encounter the next life challenge, but that doesn’t always happen.

By increasing GABA signaling via the mechanisms discussed above, valerian helps the body optimize GABA levels during stressful times.

One study found that valerian reduced stress in mice by helping maintain serotonin and norepinephrine in two specific brain regions that are associated with fear and anxiety – the hippocampus and amygdala. The presence of these two neurotransmitters inhibits excessive activity in the hippocampus/amygdala. (14)

Another study done by many of the same researchers found that mice who were given valerian had reduced corticosterone levels, which is the mouse version of cortisol (often known as the “Stress Hormone). (15)

Here are some other ways to increase stress resilience:

Click here for more ways to reboot your stress response. 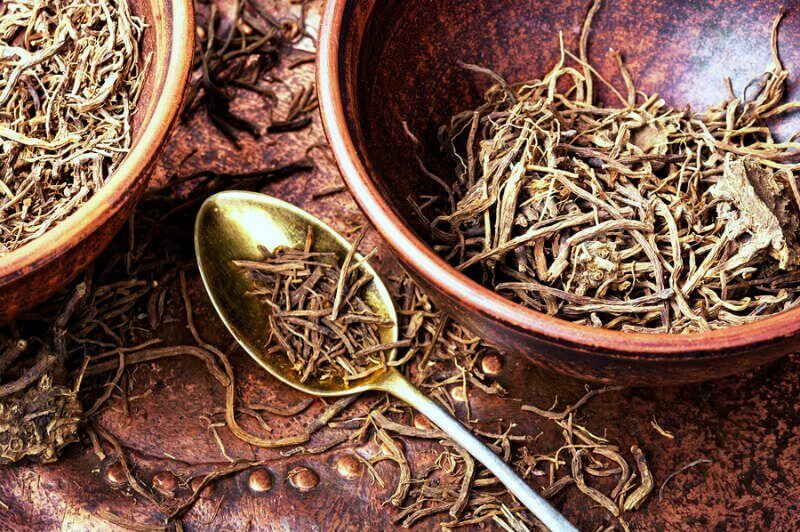 In one study done with elementary children, a combination of valerian and lemon balm improved focus, while another study done with mice showed improvements in memory and learning. (16)(15)

Pliny the Elder, who lived from 23 AD – 79 AD, recommended valerian for pain management, which makes sense if you consider that it supports GABA, which increases pain tolerance. (3) (17)

Researchers have found that valerian relax the uterus, thus easing discomfort during menstruation. (18)

Specifically, it reduces the activity of NF-kappaB, which is pro-inflammatory. (19)

Is it safe to take valerian?

According to the Botanical Safety Handbook: 2nd Edition, which is the herbal equivalent of Robert Tisserand’s authoritative guide, Essential Oil Safety, this Safety Class 1B herbs are described as:

That said, “caution is advised during use of barbiturates, bensodiazepines, and other sedative drugs,” because valerian may increase their effects.

In addition, for a small percentage of the population, valerian root has a stimulating effect rather than a calming one. Herbalists generally do not recommend valerian root in those cases.

Should I use a tincture, tea or capsules?

Especially when it comes to roots and berries, many of the beneficial compounds are better extracted by alcohol (or glycerin) than water. That’s probably why most of the valerian root preparations in the studies above are alcohol-based extracts, which are commonly known as tinctures.

There is one component of valerian root – glutamine – that is better extracted by water than alcohol. Glutamine is a building block used to make GABA. (There are several ways that valerian increases GABA signaling, this is just one of them.)

Teas can be made more quickly, but as mentioned above certain beneficial compounds are not easily extracted with water. You can increase the extraction rate by decocting them (making a long-simmered tea), but the finished product may not have as much of certain compounds as a tincture would.

However, it will have higher levels of glutamine, which is a building block of GABA.

What about valerian root capsules?

Some capsules do incorporate the whole root, but when herbs are taken as a capsule the body needs considerably more time to break down and assimilate the nutrients. If digestion is weak, sometimes not all the therapeutic properties will be absorbed.

So what’s the best extraction approach with valerian root? As I mentioned above there are benefits to both tincture and tea forms, so I’ve included recipes for both.

How much valerian should I take? (Valerian root dosage)

According to renowned herbalist Rosemary Gladstar, valerian root “is a nonaddictive, non-habit-forming sedative, and it will not make you sleepy or groggy unless really large amounts are consumed. So don’t be afraid to take adequate amounts of valerian.

Begin with a low dosage and increase it until you feel its relaxing effects. You’ll know you’ve taken too much if you have a ‘rubberlike’ feeling in the muscles – as if they were too relaxed – or a feeling of heaviness. If that’s the case, cut back the [amount] so that you feel relaxed but alert.” (21)

When taken as a tincture, she recommends starting with 1/4 teaspoon, taking an additional dose after 30 minutes if needed.

One thing to keep in mind is that – at least in the book Rosemary Gladstar’s Herbal Recipes For Vibrant Health – Rosemary uses the folk method for making tinctures.

The folk method involves placing the herb in a clean jar and pouring in enough alcohol to completely cover the herb, whereas more precise methods involve weighing the herbs and measuring out the liquid by volume.

My reason for mentioning this is that the exact strength of a tincture made via the folk method can vary, so Rosemary’s suggestion is often considered a guideline rather than a strict rule. Kathi Kemper, M.D., recommends 1/2-1 teaspoon, taken up to three times daily. (22)

How long should I take valerian root?

According to The Herbal Academy, ” Valerian should only be used for two to three weeks, followed by a break of the same duration. Continual use can cause depression and headaches in some people.” (1)

However, according to the Mayo Clinic, “Valerian seems to be most effective after you take it regularly for two or more weeks.”

Is valerian root safe during pregnancy and breastfeeding?

No information on the safety of valerian during lactation was identified in the scientific or traditional literature. While this review did not identify any concerns for use while nursing, safety has not been conclusively established.” (page 911)

When my kids find it difficult to wind down, I tend to opt for milder herbs like the ones in these sleep tinctures or sweet dreams tea.

That said, one of the studies on focus mentioned above specifically looked at the benefits of valerian for school-age children, and valerian is generally considered safe for kids over 1 when used in age-appropriate amounts.

I like Herbs for Kids Super Calm, which incorporates valerian root with milder herbs and is specifically intended for children. They include dosage information based on age/weight on the bottle. 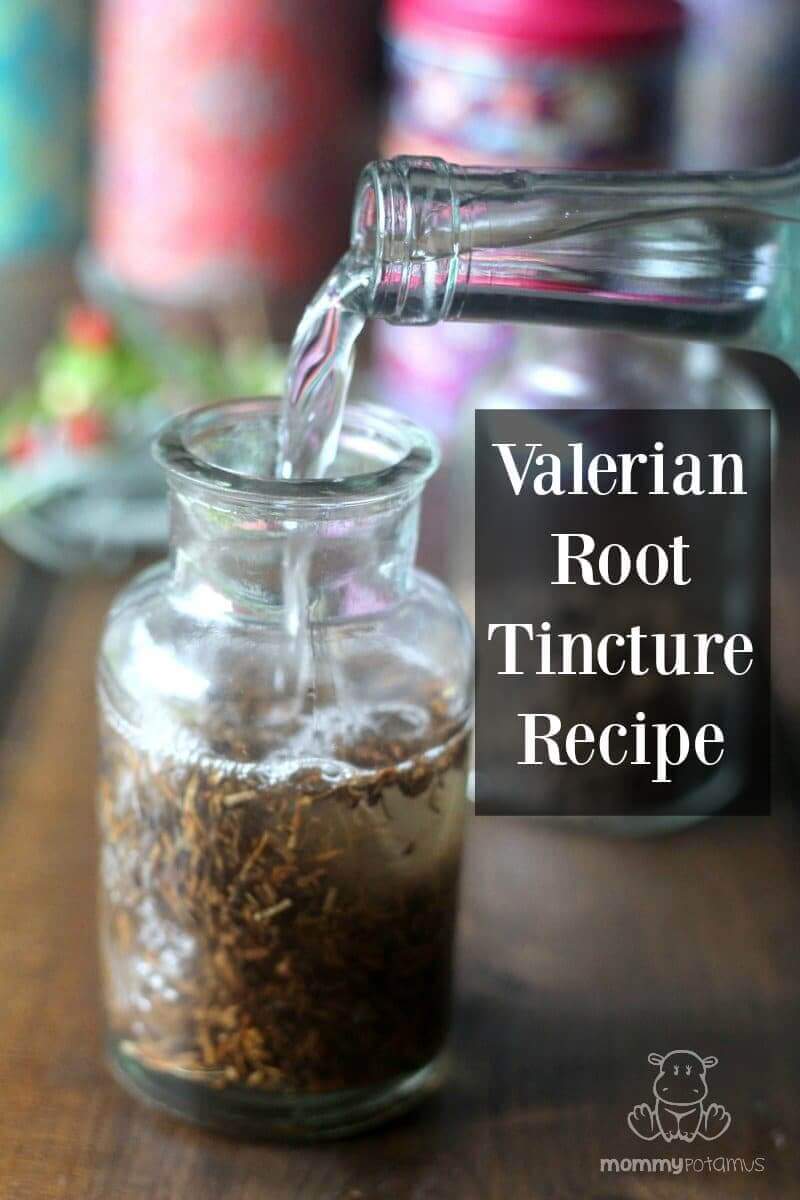 How To Make a Valerian Root Tincture

Before you brew, one thing to know is that while very helpful for relaxation, valerian root is considered to have an unpleasant smell. I don’t mind it, but depending on your preferences this may not be your cup of tea.

Bring water to a light simmer (not a boil) and add valerian root. Cover and simmer on low for 20-40 minutes, then allow to cool until it can be comfortably sipped. Strain and serve.

Sources for this article:

1. The Herbal Academy (2014) Sheltering With Valerian. Retrieved from TheHerbalAcademy.com

5. Donath, F et. al. (2000) Critical evaluation of the effect of valerian extract on sleep structure and sleep quality. Retrieved from this PubMed article.

6. Kapalka, George. (2009) Nutritional and Herbal Therapies for Children and Adolescents: A Handbook for Mental Health Clinicians (Practical Resources for the Mental Health Professional)

8. Cavadas, C. et. al. (1995) In vitro study on the interaction of Valeriana officinalis L. extracts and their amino acids on GABAA receptor in rat brain. Retrieved from this PubMed article.

11. Balemans, MG et. al. (1983) The influence of GABA on the synthesis of N-acetylserotonin, melatonin, O-acetyl-5-hydroxytryptophol and O-acetyl-5-methoxytryptophol in the pineal gland of the male Wistar rat. Retrieved from this PubMed article.

12. University of Bonn (2004) Relaxing with Lignan. Retrieved from Uni-Bonn.de.

14. Jung, HY et. al. (2015) Valerenic Acid Protects Against Physical and Psychological Stress by Reducing the Turnover of Serotonin and Norepinephrine in Mouse Hippocampus-Amygdala Region.. Retrieved from this PubMed article.

17. Enna, SJ et. al. (2006) The role of GABA in the mediation and perception of pain. Retrieved from this PubMed article.