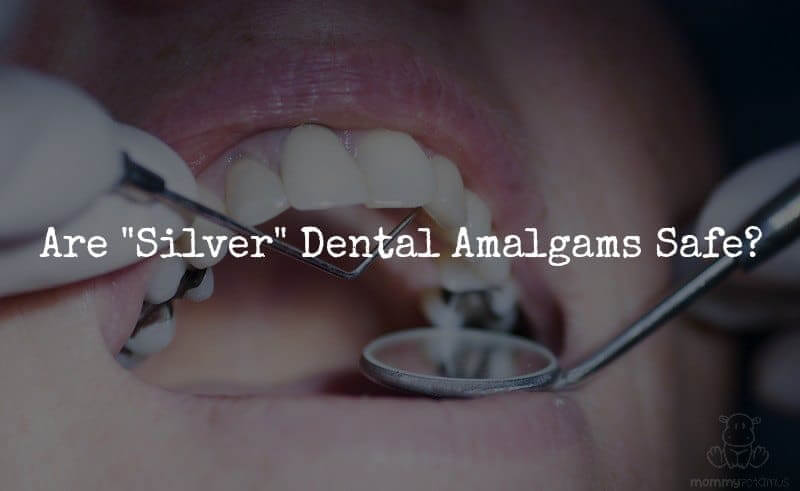 Radioactive chocolate and toothpaste <<– I’m going to go out on a limb and say that neither of these products are on your birthday wish list this year, but if you’d been born in the early 1900’s they might have been. Shortly after Marie and Pierre Curie’s discovered radium, it became a popular additive due to its supposed health benefits. Yes, really. (source 1, source 2)

Fortunately, as the risks became more well-known we were wise enough to change course – a trend that some say is happening in another industry right now – dentistry. The practice of using silver fillings, which according to the FDA contain about 50% mercury, has already been abandoned by about half of the U.S. dentists that voluntarily responded to a poll on the subject. (source: International Academy of Oral Medicine & Toxicology)

Amalgam fillings – safe or not?

Though they were once believed to be inert, current research shows chewing, drinking hot liquids, brushing teeth and other activities releases mercury vapor from amalgams. (source 1, source 2) It is estimated that about 80% of the inhaled mercury vapor is absorbed by the lungs and dispersed throughout the body. (source)

In 2001, the US National Health and Nutrition Examination released a survey of 31,000 adults which found that the number of dental fillings correlated to the incidence of cancer, thyroid conditions, mental conditions, neurological issues (including MS), diseases of the respiratory and genitourinary systems, and diseases of the eye. (source) However, it was concluded that “the correlations do not sufficiently demonstrate causation.”

The American Dental Association continues to maintain that they are safe, but other experts disagree. The International Academy of Oral Medicine and Toxicology, for example, contends that:
“Scientific data from reputable scientists all over the world has investigated how the mercury in amalgam fillings can relate to dysfunction of the immune system, multiple sclerosis, kidney ailments, chronic fatigue syndrome, allergies, reproductive issues, cardiovascular problems, absorption of heavy metals in the brain, Lou Gehrig’s disease, Alzheimer’s disease, antibiotic resistance, hearing loss, and a myriad of other health problems.” (This quote originally included footnote citations for supporting studies. I removed them to facilitate easy reading, but you can find all fifty-six of them here.)
A “new study by researchers from the University of Michigan claims that even at levels considered to be safe, mercury exposure may be hazardous to health; it may be a risk factor for autoimmune disorders among women of childbearing age.” (source)

According to the LA Times, “Mercury amalgams have been banned in three countries, Norway, Denmark and Sweden, after studies indicated that mercury levels in placental and fetal tissue corresponded directly to the mother’s number of mercury fillings, and a recent Food and Drug Administration advisory committee recommended a similar ban in this country, due to a lack of clinical research proving the safety of amalgam fillings.”

The current position of the FDA is that:

Studies of healthy subjects with amalgam fillings have shown that mercury from exposure to mercury vapor bioaccumulates in certain tissues of the body including kidneys and brain. Studies have not shown that bioaccumulation of mercury from dental amalgam results in damage to target organs.” (source)

However, according to some experts such as the authors of this analysis, the difficulty with statements like this is that “Chronic mercury toxicity is especially insidious because symptoms are variable and nonspecific” and “diagnostic tests are often misunderstood.” As mentioned in this article from James Roberts, MD, MPH, the “safe threshold” for heavy metal exposure continues to be lowered as researchers develop better ways to detect damage on a clinical level.

Another factor to consider is that about 30-50% of the U.S. population has the mthfr genetic mutation, which can impair glutathione production in the body. Glutathione is considered a “master antioxidant” which helps the body flush away heavy metals, so those with impaired function may accumulate more than the average person.

One study which originally concluded that mercury-containing amalgams were safe for children – when reanalyzed by four members of the original team and others – actually found what the report calls “evidence of harm,” including neurobehavioral deficits and kidney damage. (source) The analysis notes that individuals with several genetic mutations other than MTHFR seemed to be more susceptible. Other studies have concluded that removal of amalgams is associated a reduction in health complaints reported by the patient. (More on that later.)

Are there alternatives to dental amalgam?

Yes. With the help of a mineral-rich diet – which contributes to a normal biological process called remineralization – this oral probiotic (which I’ll be reviewing soon) and brushing, flossing and oil pulling, I hope to avoid cavities completely. (source 1, source 2)

However, if I had a cavity that needed attention, I would opt for restorative materials that were specifically compatible with my physiology. You can read more about biocompatible dentistry here.

Should mercury-containing dental amalgams be removed?

Dentists who believe mercury amalgams are safe say no, and dentists who believe they are unsafe often say yes, but clarify that it needs to be done safely. In this study conducted in Sweden, individuals who had their amalgams removed did report significantly fewer health challenges three years later than the control group. The study concluded that “Reduced exposure to mercury, patient-centred [sic] treatment and follow-ups, and elimination of worry are factors that may have influenced the results.” (source)

I was first introduced to the controversy around dental amalgams by a family friend who happened to be a dentist. He felt that they do present risks, which concerned me because my husband had them. Removal wasn’t something we rushed into, though. Budget was an issue for us, as was the desire to find a local practitioner who knew how to take them out safely.

Last year, after much research, my husband finally had his removed by a dentist recommended by the International Academy of Oral Medicine and Toxicology. They have more information about removing fillings safely available here and a provider finder along with more helpful information here.

Is there a safe way to detox from mercury?

In the next post I’ll share the strategies I used with my husband, along with several surprising myths I discovered along the way.