My kids could care less when I make myself a cup of passionflower or banana tea, but if they see me grab the butterfly pea flowers they all gather in the kitchen to watch. I can’t blame them – brewing these flowers does feel a little like kitchen alchemy.

When freshly made, the tea is a deep blue color that’s so vivid it almost doesn’t seem real. Things really get interesting when you grab a slice of lemon or lime, though – squeeze a little into the cup, and the tea will transform into a pink or violet hue right before your eyes.

That’s why just as butterflies are considered a metaphor for growth and transformation, this flower reminds us that when life give us lemons we can use them to make something beautiful.

And here’s what it looks like after adding a squeeze of lemon:

Of course, the benefits of butterfly pea flowers go beyond the stunning colors they create. Rich in antioxidants, they have long been used in Chinese and Ayurvedic medicine to support memory and cognition, counteract stress, support collagen formation, encourage restful sleep, and more.

Also, though most sources say the flowers are generally considered safe when taken in moderation, there are some contraindications and even a little controversy to be aware of. We’ll dive into all that below, but first I want to mention that none of these statements have been evaluated by the FDA, this article is not medical advice, and it is not meant to diagnose or treat any condition.

What is butterfly pea flower? ^

Native to South East Asian countries like Thailand, Malaysia, Indonesia, India and Sri Lanka, the butterfly pea plant (Clitoria ternatea) is a twining herb that belongs to the Fabaceae family, which is considered an “economically and medicinally important family of flowering plants.” (1)

The vibrant blue flowers have been used for centuries both therapeutically and as natural food coloring. In Thailand, the petals are also blended with a saponin-rich (aka foaming) plant that is used as a kind of herbal shampoo. According to tradition, topical application of the pea flower supports hair growth, scalp health, and skin hydration.

It doesn’t have much flavor, so it’s often paired with stronger flavors like lemon, lime, lemongrass, ginger, and mint.

In Thailand, it’s often enjoyed as an after dinner drink called nam doc anchan, which is a blend of butterfly pea tea, sweetener, and lemon or lime juice. Powdered butterfly pea flowers are sometimes called blue matcha, which can be used to create lattes, blue rice, purple or blue desserts, and more.

This vibrant flower has been used for centuries both internally and externally. Here’s what current studies say about its benefits (and potential benefits):

In the Ayurvedic tradition, butterfly pea is considered a medhya rayasana (brain tonic) that supports memory and cognitive function. (2) (3)

Interestingly, modern research classifies it as a nootropic, which is a substance that supports “cognition and memory and facilitates learning.” (4)(5)

Studies suggest that butterfly pea’s brain supportive properties are a result of its beneficial influence on acetylcholine levels in the hippocampus. (6)

Important note: One study found that butterfly pea root extract had a more potent effect than the flower extract, though both demonstrated nootropic properties. However, the study used a white variety of butterfly pea flower instead of the blue one that is more commonly used. (7)

Additional research would be helpful in determining if the blue variety has more potent nootropic effects than the white variety. I personally prefer the flower over the root because the root may cause mild digestive discomfort and diarrhea (it is traditionally used as a laxative).

Some researchers classify butterfly pea as an adaptogen, or herb that increases our resilience to stress. (8) Others classify it as a nervine, or herb that relaxes the nervous system. Either way, it has long been used to soothe stressed and frazzled nerves, ease feelings of anxiousness, and lift mood.

It’s naturally caffeine-free, which is why many people sip it before bed as an alternative to chamomile tea.

Our bodies break down toxins via oxidation – a process that transforms them into water-soluble compounds that can be flushed out of the body. While it’s an absolutely necessary and beneficial process, it does create free radicals that can damage tissues and accelerate aging unless they’re neutralized by antioxidants.

Detoxification and free radical formation is something our bodies do every single day, which is why we need to supply ourselves with a steady supply of antioxidants to counteract them. Butterfly pea is rich in an anthocyanin called ternatin, which is a potent antioxidant that gives the flower its vibrant hue.

It also contains several other antioxidants, including:

Butterfly pea has been prized for its skincare benefits in South East Asia for centuries, and for good reason. When applied topically, it:

Butterfly petals have been traditionally blended with saponin-rich (aka foaming) roots to use as herbal shampoo. They are believed to support hair growth and scalp health, and modern research seems to support this perspective. In one animal study, an extract of butterfly pea was one of the highest performing herbs in terms of supporting hair growth. (14)

In one small study done with healthy volunteers, researchers found found that drinking a beverage containing butterfly pea flower had a positive influence on blood sugar levels – even though the drink itself contained sugar. (15) Other studies have demonstrated similar results. (16)

#7 – May Support The Digestive System ^

As I mentioned earlier, the roots are traditionally used as natural laxatives. The leaves are also, though to a lesser extent. 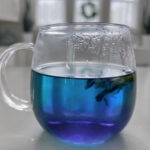 Nutrition data is not available for this recipe.

Does butterfly pea flower have any side effects? ^

Butterfly pea flower has been consumed for centuries without any apparent significant adverse effects, and most sources say it’s generally considered safe when taken in moderation. That includes an international agricultural organization that represents farmers in the region it’s grown in. (17) However, there are some safety considerations to be aware of, which we’ll discuss below.

For starters, there are some anecdotal reports of the herb causing nausea, stomach discomfort, and diarrhea. The roots (and to a lesser extent the leaves) have been traditionally used as a laxative, so it seems reasonable that these effects could occur.

In one animal study, researchers didn’t note any toxic effects even at very high doses (2000-3000 mg/kg). They did say that mice who received over 2000 mg/kg developed droopy eyelids and acted lethargic, which is not surprising since butterfly pea has long been considered to have sedative effects. (7)

The mice given root extract also developed watery stools, which seems to validate the anecdotal reports mentioned above. Another animal study concluded that butterfly pea extract is non-toxic. (18)

That said, some sources say the plant promotes uterine contractions and should be avoided during pregnancy. The roots are sometimes mentioned in particular, but until more information is available I would avoid the whole plant out of caution.

Their main concern seems to be the presence of peptides called cyclotides. In vitro (petri dish) studies suggest that one cyclotide in particular may have possible effects on the immune system and uterus, but it’s not a cyclotide found in pea flower. However, they’ve expressed reservations about the cyclotides that are present, stating that they have an “unknown toxicological profile.”

In vitro studies are unable to “capture the inherent complexity of organ systems,” including how a complex plant interacts with complex human physiology (19) For that reason, “in vitro studies have developed a reputation for being ‘less translatable’ to humans” in terms of practical application. (19)

Bottom Line: The EFSA decision definitely motivated me to look more closely at safety considerations, but I didn’t find anything in the clinical research that raised concerns.

The vast majority of sources say butterfly pea flower is safe, both from a clinical study perspective and in traditional use. It’s widely grown for therapeutic purposes, and I personally use it both in my skincare routine and to make tea and lemonade. (20) I don’t use the roots and leaves because they seem to be associated with more potential for GI discomfort, and also because there isn’t a lot of guidance about traditional preparation and usage in my herbal books.

However, the flower infusions I make are based on traditional recipes. I feel comfortable with using the plant petals and there is ample information available on how to prepare it from locals who have been using it for generations. Your comfort level might be different, though, and that’s okay.

Blue Moon Milk – There’s something that just feels so beautiful and therapeutic about whipping up a nighttime cup of moon milk with sleep supporting herbs. In this article I dive into its Ayurvedic origins and benefits, plus how to make it four ways.

Butterfly Pea Flower Facial Toner – This three-ingredient skin toner is one of my favorite skincare discoveries . . . ever. It’s easy to make, feels so refreshing, and contains a wide variety of potent antioxidants that hydrate, support collagen and elastin integrity, promote skin clarity and more.