When I first heard that dandelion root is used as a coffee substitute, I immediately ruled it out as something I wanted or needed in my life. Because y’all, I. AM. NOT. breaking up with coffee. And yet, as I dug deeper into the health benefits of dandelion flowers, leaves, and roots, I realized that there’s way more to dandelion tea than its use as a coffee substitute.

In Persian, the dandelion plant (Taraxacum officinale) is called the “small postman” because it is thought to bring good news. (1) It’s one of the first flowers that pops up in spring, and it stays with us all through the summer. That makes it one of the easiest herbs to harvest and use – which is awesome because it has lots of uses!

This rich, creamy dandelion root tea is so delicious that I always make a double batch – one cup for me, and one to replace that cup when my littles steal it.

So, what is dandelion tea used for?

The antioxidant-rich dandelion leaves can be made into a tea that’s traditionally used to strengthen digestion and/or as a diuretic to help the body let go of excess water.

In this recipe we’ll be using the roots, which are helpful for balancing hormones and detox support. They also have anti-inflammatory properties due to the presence of taraxasterols, and are rich in minerals (iron, manganese, magnesium, calcium, potassium) and nutritive compounds such as carotenes. (2)

In traditional herbal medicine, dandelion root is used to help get things moving in cases of mild constipation. Raw roots are rich in the gut-nourishing prebiotic inulin, and although roasting reduces the amount there is still a significant amount in this tea. Hot water and a little time is the best way to extract inulin, which is just another reason to love this recipe.

Where do I get dandelion root?

You can buy dandelion root – which is very affordable – here. Or you can use fresh dandelion roots that you’ve gathered from an area that has not been sprayed with pesticides. Here’s how to properly identify dandelions.

You will need to scrub, chop and dry them out before roasting them, though. I typically put mine in my dehydrator at 95°F for about 12 hours, but you can also just lay them on a towel in a dry, cool area until they’re brittle.

How do you roast dandelion root?

Although you may be imagining that it’s similar to the daunting process of artisanal coffee roasting, it actually couldn’t be easier. All you do is throw some dried roots in a pan over medium-high heat and stir until they become golden brown and fragrant. Yep, that’s it.

What’s the difference between dandelion coffee and tea?

They’re exactly the same thing. 🙂 For whatever reason, dandelion tea is reminiscent of regular coffee and that’s why it’s sometimes called dandelion coffee. It’s a hard connection to explain until you’ve tried it. If you’ve ever had a friend that reminds you of someone else, and yet you can’t put your finger on why, it’s basically like that.

This rich, creamy dandelion root tea is so delicious that I always make a double batch – one cup for me, and one to replace that cup when my littles steal away its deliciousness. It’s helpful for detox, digestion, and balancing hormones, plus it has lots of minerals and nutritive compounds that support wellness. 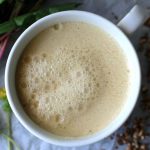 This rich, creamy dandelion root tea is so delicious that I always make a double batch – one cup for me, and one to replace that cup when my littles steal away its deliciousness. It's helpful for detox, digestion, and balancing hormones, plus it has lots of minerals and nutritive compounds that support wellness.
Course Beverages
Cuisine American
Keyword herbs, local
Calories 0kcal
Author Mommypotamus

If you want to use fresh dandelion root, you will need to scrub, chop and dry them out before roasting them, though. I typically put mine in my dehydrator at 95°F for about 12 hours, but you can also just lay them on a towel in a dry, cool area until they’re brittle.

Can I drink dandelion tea if I’m pregnant or breastfeeding?

According to the Botanical Safety Handbook, dandelion is a Safety Class 1A herb – the safest rating possible. It is described as:

Always check with your doctor before adding herbs to your diet, and listen to your intuition to help you make the best choice for yourself.

Does dandelion tea have any side effects?

As mentioned above, dandelion has the highest safety rating possible. With that said, it may trigger allergic reactions in people who are allergic to related plants such as ragweed, daisies, marigolds, or chrysanthemums.

Banana Tea – When taken about an hour before bed, banana peel tea can help calm the nervous system and help the body prepare for deep sleep. That’s because banana peels contain compounds that our bodies use to make melatonin, plus potassium and magnesium (which help relax muscles).

It’s mildly sweet, and all you need to make it is a banana peel (although you can add flavorings like cinnamon or vanilla).

Moon Milk– There’s something that just feels so beautiful and therapeutic – even enchanting – about whipping up a nighttime cup of moon milk with sleep supporting herbs. We’ll dive into its Ayurvedic origins and benefits, plus how to make four yummy versions.

Elderberry Tea – Elderberries are revered for their ability to support the immune system, but they have other benefits, too! For example, they contain flavonoids and anthocyanins that help the body absorb vitamin C – a vital nutrient that assists with collagen production and a variety of other processes. They need a little extra coaxing to release their therapeutic compounds, and I explain what’s needed in this recipe.