We all know about the rock stars of immune support – elderberry syrup and fire cider – but have you ever heard of their less famous band mate, ginger syrup?

This member of the Zingiberaceae family (to which turmeric also belongs) has been used in Chinese medicine for thousands of years to soothe tummy complaints such as nausea, morning sickness, gas, motion sickness, and indigestion.

But that’s not all it’s used for. In fact, the Ayurvedic herbal tradition “reveres ginger so highly it is referred to as ‘the universal medicine.” (1) Here’s why:

While historically it was very expensive – one pound cost as much as a whole sheep in the Middle Ages – these days it’s widely cultivated and very affordable. (source) I like to keep it on hand during the cold winter months along with other syrups, tinctures and teas that support the immune system.

Delicious Ways To Use Ginger Syrup

This warming ginger syrup is incredibly versatile – if you’d like to give it a try but are not quite sure what to do with it, here are some ideas:

While technically this is a tutorial for making elderberry syrup, the process is exactly the same. Just substitute ginger for elderberries and you’re good to go! 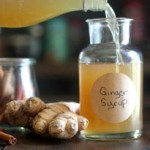 Because this recipe contains honey, it should not be used in children under one. According to Rosemary Gladstar, the syrup should stay good from several weeks to months. If you are concerned that you might not be able to use it all in time, you may want to cut the recipe in half or freeze some in an ice cube tray for later.

Lemon Ginger Tea – This immune support tea is made with three essentials, plus 1-5 optional ingredients based on what you have on hand. It’s easy to make, too.