One of my favorite ways to use Yeasty Beasty – aka our ginger bug – is to make fizzy homemade ginger ale. Unlike store-bought sodas, it’s rich in beneficial probiotics and fresh ginger, which is often referred to as the “universal medicine” in Ayurveda. (1)

Another of our kitchen medicine miracles, ginger runs a close second to garlic in versatility and popularity, both culinarily and medicinally. It’s a tasty remedy, so people are more willing to use it. I often mix ginger with less tasty medicinals to make them more appealing. And ginger is highly regarded as a medicinal herb.” – Rosemary Gladstar’s Medicinal Herbs

What is ginger ale?

Most store-bought ginger ales are made by mixing ginger extract (and other flavorings) with carbonated water and high fructose corn syrup. You can make a healthier version at home by mixing my homemade ginger syrup with sparkling mineral water, seltzer water or club soda.

Or you can make this probiotic-rich, naturally fizzy version, which is sometimes called ginger beer. It’s more gingery than the store-bought stuff, which my kids love.

One quick note before we dive into the recipe: When you look at the amount of sugar used you may think, “Whoa, that’s a lot.” Just keep in mind that much of the sugar will be used up during the fermentation process and will not be in the final product. If you taste it after fermenting for three days and it’s too sweet, just keep fermenting. If you taste it after five and it’s not sweet enough, just add a little sweetener in. Easy peasy. 🙂 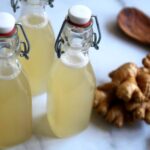 This recipe will fill approximately 8-9 of the swing top bottles pictured or 4-5 of these larger swing-top bottles.  If you don’t have swing top bottles and prefer to use what you have on hand, opt for a jar that gets a good seal when the lid is on. Fido jars are a good option, but mason jars will work, too. Ginger ale that is fermented in jars won’t be very fizzy (if at all), but it will still be probiotic-rich and yummy.

Soft Gingerbread Cookies – These soft and chewy cookies blend sweet cinnamon and a hint of vanilla with zingy ginger and molasses. They’re surprisingly simple to make, fun to decorate and so delicious!

Lemon Ginger Tea – This soothing tea can be adapted to whatever you have on hand. In addition to the lemon, ginger & honey – choose 1-5 of the ingredients included in the recipe for your brew.