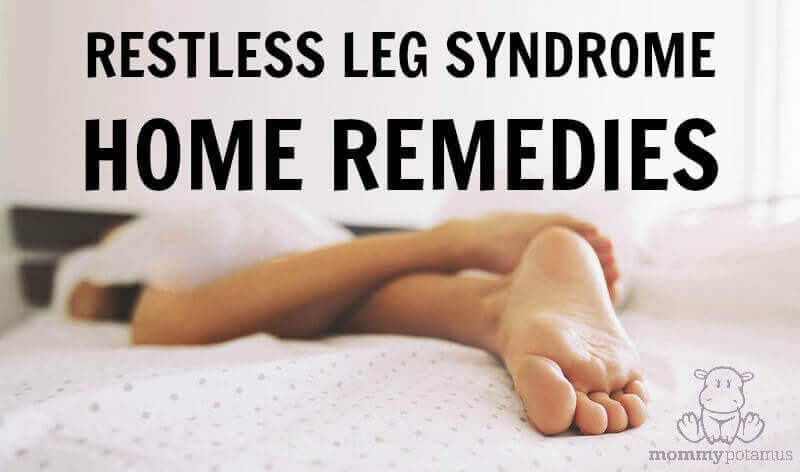 Inside: Possible causes of achy legs at night, plus restless leg syndrome home remedies suggested by Dr. Dean, M.D. and other functional medicine practitioners. For more information on getting better sleep, check out 18 Science-Backed Sleep Tips.

Creepy crawly misery. I can’t speak for everyone else’s experience with Restless Leg Syndrome, but that pretty much sums it up for me. I struggled with this sleep thief off and on since I was about 8 years old, and was taking tranquilizers to manage it by my early twenties.

Fortunately, through a little trial and error I’ve been able to eliminate my symptoms without the help of medications. I’ll be sharing what I did in this post, but first a disclaimer: I am not a doctor and this post is not intended to diagnose or treat anything. I’m just a girl whose doctor once said “The next step after this is basically a horse tranquilizer” who wanted (and found) a medication-free approach that worked for me. See my full disclaimer here. Okay, moving on!

What Is Restless Leg Syndrome?

According to the National Institute of Neurological Disorders:

Restless legs syndrome (RLS) is a neurological disorder characterized by throbbing, pulling, creeping, or other unpleasant sensations in the legs and an uncontrollable, and sometimes overwhelming, urge to move them. Symptoms occur primarily at night when a person is relaxing or at rest and can increase in severity during the night. Moving the legs relieves the discomfort. Often called paresthesias (abnormal sensations) or dysesthesias (unpleasant abnormal sensations), the sensations range in severity from uncomfortable to irritating to painful.

The most distinctive or unusual aspect of the condition is that lying down and trying to relax activates the symptoms. Most people with RLS have difficulty falling asleep and staying asleep. Left untreated, the condition causes exhaustion and daytime fatigue.

So, what causes Restless Leg Syndrome? Just like a stomachache can be caused by a virus, eating too much, constipation, etc., there are several possible causes for restless leg symptoms. Here are a few worth considering:

Magnesium is needed to push excess calcium out of cells so that smooth muscle can relax. A deficiency can cause muscle tightening, twitches, involuntary jerks, and spasms. Unfortunately, magnesium deficiency is common these days because:

So how can we improve our magnesium levels?

As I already mentioned, it’s challenging to get enough magnesiums from foods due to soil depletion. Here’s a guide to magnesium supplementation, and here’s a recipe for bath salts that can help improve levels.

But what about the 2:1 ratio of calcium to magnesium intake I’m supposed to have? Won’t this mess me up?

Experts often suggest that people need to consume twice as much calcium as magnesium for bone health. According to Dr. Carolyn Dean, the supposed “ideal” ratio is a myth. Apparently, the recommendation goes back to statements made by French scientist Jean Durlach, who warned that calcium intake should never exceed twice the amount of magnesium consumed. New research indicates why he made this suggestion –  without adequate magnesium, calcium can calcify soft tissue and contribute to heart disease. (source)

According to Dean, “A hundred years ago we enjoyed a diet high in magnesium with a daily intake of 500 mg. Today we are lucky to get 200 mg.[8] However, calcium in the diet has never been higher. This high-calcium, low-magnesium diet, when coupled with calcium supplementation, can give a calcium to magnesium imbalance of 10:1 or even higher — which constitutes a walking time bomb of impaired bone health and heart disease.” (source)

Dr. Dean recommends getting a 1:2 or at least a 1:1 (calcium to magnesium) ratio in the diet.

According to this study, “Patients with RLS have lower levels of dopamine in the substantia nigra and respond to iron administration. Iron, as a cofactor in dopamine production, plays a central role in the etiology of RLS.”

Low dopamine can cause neurological problems such as the creepy crawly sensations described above. That’s why Parkinson’s drugs are often used to treat Restless Leg symptoms – they contain dopamine antagonists which mimic dopamine in the brain.

Before you supplement with iron, though, there are three things to consider:

1. Iron and magnesium compete for receptor sites in the body, so taking too much can affect magnesium stores.

2. Sometimes an individual can consume adequate amounts of iron yet still be deficient because the iron is being “stolen” by an overgrowth of iron-loving microbes in the gut. Here’s how Dr. Campbell-McBride, author of Gut & Psychology Syndrome, explains it:

Most people with abnormal gut flora have various stages of anaemia. It is not surprising. . . . people with damaged gut flora often have a particular group of pathogenic bacteria growing in their gut, which are iron-loving bacteria (Actinomyces spp., Mycobacterium spp., pathogenic strains of E. coli, Corynebacterium spp., and many others). They consume whatever iron the person gets from the diet, leaving that person deficient in iron. Unfortunately, supplementing iron makes these bacteria grow stronger and does not remedy anaemia.” (Gut & Psychology Syndrome)

This is not to say that we should be afraid to consume iron, but rather that if something doesn’t feel like it’s adding up this is something worth exploring. This article is a good starting point.

3. Most iron supplements contain nonheme iron, which can be difficult for the body to absorb. Heme iron, which is found in liver (or dessicated liver capsules) and red meat is more bioavailable. Another option is Floradix, which is an herbal preparation of iron that is well-absorbed.

Low levels of vitamin B12 and B9 (folate) are also documented causes of Restless Leg Syndrome. (source) About 30-50% of Americans have a genetic mutation called MTHFR that reduces our ability to utilize vitamin B9. In those cases, it can be helpful to supplement with a highly bioavailable form along with the other B-vitamins. More info on that here.

What Else Can Cause Restless Leg Syndrome?

According to Chris Kresser, LAc, Restless Leg Syndrome may also be caused by systemic inflammation/ immune dysregulation, Small Intestinal Bacterial Overgrowth (SIBO), or Vitamin D deficiency. You can read more about his approach to those issues here.

RLS is also related to several factors/conditions and may have a genetic component in some cases, but researchers aren’t yet certain what the connection is. Some – such as medications that deplete nutrients such as magnesium – may cause RLS, while others may simply share underlying causes.

Supplementing with magnesium and B-vitamins resolved the symptoms for me – my legs became calm and I was able to fall asleep without any problems. I’ve been medication-free for over ten years without any issues except during pregnancy, which leads me to . . .

Unfortunately, Restless Leg symptoms often increase during pregnancy and while breastfeeding, possibly due to the body’s increased utilization of magnesium, iron, B-vitamins and other nutrients. My symptoms would occasionally reappear during pregnancy, but if I increased my magnesium and B-vitamin intake they would resolve.

In A Nutshell: Tips For Calming Restless Legs

What’s worked for you?