Ounce for ounce, liver Is the most nutrient-dense food we know of. And yet, it’s the one word when spoken that causes every child (and husband) to cringe. In fact, we started taking these grass-fed organ meat complex supplements to help us get enough vital organ meats into our daily diet.

But every now and then, when throwing liver recipes at the wall to see what sticks (metaphorically), you hit on a recipe that not only everyone will eat, but actually enjoy as well.

Beef chili was a staple of my childhood, but the canned stuff I grew up on is just mystery meat in a can of preservatives. So while experimenting with all the various ways to mask the undesirable liver flavor, I found a beef chili recipe that actually satisfies those hearty meal cravings and reminds me of some favorite childhood memories (only much healthier).

Liver is chock full of – hang on, I am not going to quote stats today . . . how about a story instead?

Alrighty then, weird science story it is! Back in the 1950’s Dr. Benjamin K. Ershoff selected three groups of rats for a feeding experiment. The first group was fed a basic diet fortified with 11 vitamins. Group 2 received the same ration along with b-complex vitamins. Group 3 also ate the same diet, but instead of b-vitamins they were supplemented with powdered liver.

After several weeks, the animals were placed one by one into a drum of cold water from which they could not climb out. They literally were forced to sink or swim. Rats in the first group swam for an average 13.3 minutes before giving up. The second group, which had the added fortifications of B vitamins, swam for an average of 13.4 minutes. Of the last group of rats, the ones receiving liver, three swam for 63, 83 and 87 minutes. The other nine rats in this group were still swimming vigorously at the end of two hours when the test was terminated. Something in the liver had prevented them from becoming exhausted. To this day scientists have not been able to pin a label on this anti-fatigue factor.
The Liver Files

I don’t know a mama who couldn’t use an anti-fatigue boost. Unfortunately, most people (including me) don’t enjoy the taste of liver. Fortunately for us, there IS a way to get your family to eat liver and like it!

Just last night I whipped up a batch of this beef and liver chili to photograph for today’s post and – even though he knows there ALWAYS is – My husband asked if there was liver in the chili. Yep, really. And oh, I forgot to mention that it’s actually good, too! 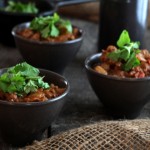 To make the beans:

To make the chili:

* Beef liver can be substituted but it will need to be finely minced before it is sauteed with the onions/garlic. Also, I recommend using no more than 1/2 pound as beef liver has a very strong taste.

Do you love this recipe?

Then you’ll also probably like these recipes for Chicken Liver Pâté with Bacon and Bayou Dirty Rice.