In my house, this quick ketchup practically makes recipe fails launch themselves into the mouths of the my kids, but my husband is not a superfan. His favorite condiments all center around one quality- creaminess. Whether it’s homemade ranch dressing, chipotle mayo or tartar sauce served over paleo crab cakes, creamy wins every time.

This real food version of tartar sauce holds a lot of memories for him – long ago cafeteria dinners with his grandma where a balanced meal consisted of fried fish, steamed corn, macaroni, and a dinner roll. Not exactly a well-balanced meal, but the memories are priceless.

As a boy, he wasn’t an adventurous eater. But you could get him to try almost any seafood with a dab of tartar sauce. Though he’s pretty much willing to try anything these days, there’s still a certain magic to this beloved staple. I hope your family loves it as much as we do. 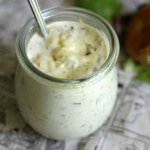