Mommypotamus » Health » How I Reversed My Daughter’s Tooth Decay 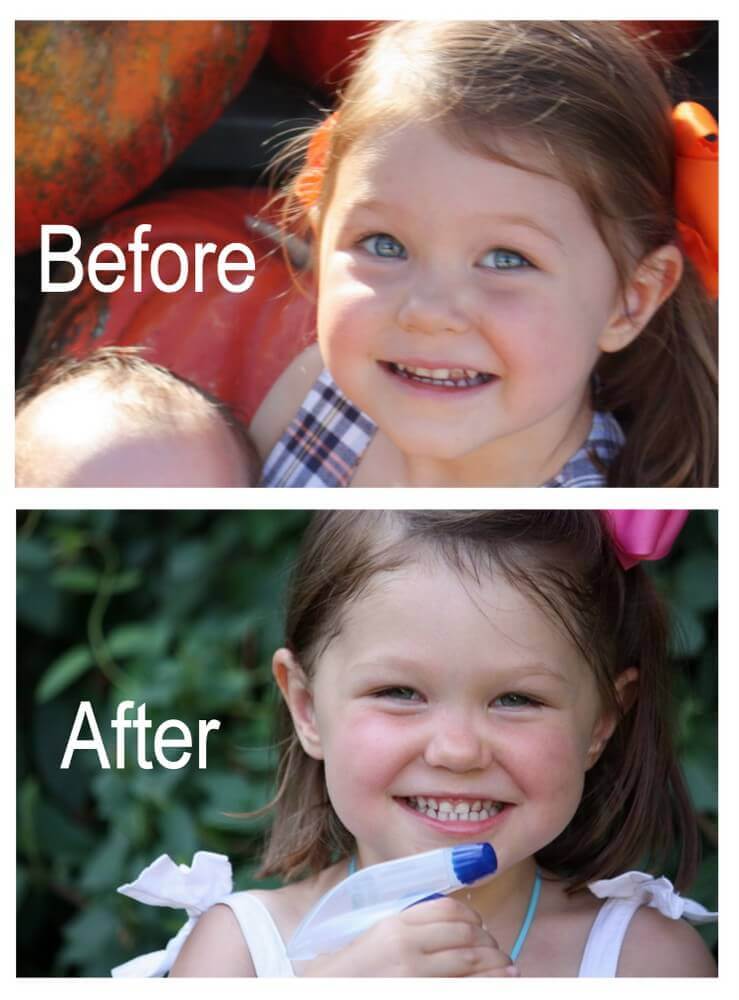 I felt the sting every time she smiled at a stranger and they looked at me wonderingly. I wanted to explain that I wasn’t negligent . . . that my daughter had never even had a processed food, but truth is I agreed with their disapproving looks. How could I let this happen and not do anything about it?

I’m talking, of course, about my daughter’s tooth decay. Though I’ve told this story in bits and pieces, somehow I’ve never put it together in a way that shares our journey from beginning to end. Today I’m going to do just that, so let’s get started!

How My Toddler Developed Tooth Decay While Eating A Weston A. Price Diet

The connection between nutrient-dense diets and resistance to cavities has been well-established, which is one of the many reasons I ate a very traditional diet throughout pregnancy and breastfeeding: raw milk, lots of butter, pastured and organic meats, local eggs and organic produce. I hadn’t braved organ meats at that point, but I did take them in supplement form.

Despite all this, my daughter’s teeth started crumbling when she was 19 months old. One day I laid her down to change her diaper and realized part of her front tooth was missing. It was there when I dressed her that morning, and then it just . . . wasn’t. There was no fall, no trauma. I’d been with her the whole morning. The next day a friend who is a dentist examined her and said her front teeth were just incredibly weak.

Looking back I attribute her weak teeth to two main causes. First, she had an undiagnosed lip tie, which is a condition that has become increasingly common over the past few generations. When a lip tie – also known as a maxillary frenum attachment – is present the mouth has trouble clearing milk away from the top four teeth. In Katie it caused the breast fed version of what is commonly called “bottle rot.”

Research has shown that cocaine exposure increases the incidence of tongue ties (ankyloglossia), which is not a factor in my case. However, the fact that some chemicals have already been studied and linked to this defect makes me wonder which ones might that haven’t been studied. I’ve been making my own beauty and cleaning products for years, but before that I used a slew of toxic chemicals. I sometimes wonder if the two things might be related.

For those who are wondering whether their little one might be tongue/lip tied, here’s a post on how to diagnose at home and/or get free advice from the top U.S. expert on tongue and lip ties.

The second factor that I think played a role is inadequate vitamins A, D & K. Though we were eating a traditional diet, I still wasn’t fully sold on fermented cod liver oil. From what I’d heard it wasn’t an adequate source of omega-3’s. I’ve since changed my mind, but back then my fridge was stocked with several fish oils that supposedly had different benefits. Knowing what I know now I would have exclusively given her fermented cod liver oil, which I believe might have helped to slow or completely halt the decay. In addition, we were already consuming a lot of organic butter, but it wasn’t necessarily always pastured, which means it was unlikely to contain substantial amounts of Vitamin K.

The third factor that I believe played a role… One of the most difficult things I experienced during my pregnancy with Katie was that my first trimester occurred during one of the most rainy seasons on record. I deeply craved sunlight during those first few months, which I believe was related to a need for more vitamin D. It was a miserable time, and it had long lasting effects. Katie’s baby teeth, which formed around the second month in utero, were very weak and porous. Fortunately, her adult teeth formed around 20 weeks after I had plenty of sunshine.

As soon as Katie’s tooth broke I ordered Ramiel Nagel’s book, Cure Tooth Decay. This book is a MUST READ for anyone interested in reversing tooth decay naturally. Though as I mentioned earlier we were already eating a 99.99% traditional diet, I did implement several changes after reading the book:

When Katie was 30 months old, I kissed toothpaste goodbye and started brushing her teeth with Dr. Christopher’s Herbal Tooth & Gum Powder. We went through one container and then I transitioned her to tooth suds. (We now use a homemade tooth powder that we like even more.) 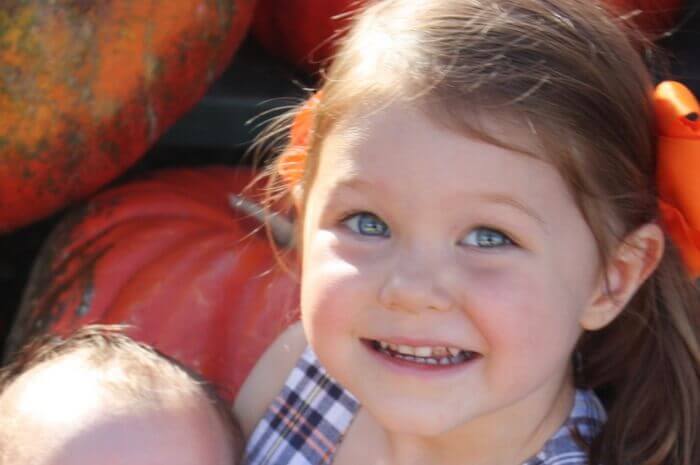 Her incisors became very porous and brown over time. If you’re looking closely you might also notice her front tooth appears to have partially grown back. I’ll explain that later on in the story.

Exactly one year after I wrote the post about kissing toothpaste goodbye I took Katie to a holistic dentist to discuss filling options. Her teeth were so incredibly brown, and I was worried that if the decay went to the root it would harm her adult teeth.

To say I was confused is a massive understatement. Katie had a broad, wide palate and vibrant health in every way. She’d never had an ear infection or taken medications of any kind, so why were her front teeth turning to chalk? I had no idea what I’d done wrong, but it was devastating to watch.

Here’s an excerpt from a post I wrote about that day:

Katie signs in her babydoll and ‘fills-out’ some insurance forms. I make a mental note that my bank deposit receipt is now doubling as a medical record for baby Alex, but just can’t stop gaping at the copy of Cure Tooth Decay front and center on the bookshelf, followed by the Cancer Is Curable Now DVD and Homeopathic Medicine at Home.

Mental calculations on the likelihood that we’ve been sucked into a parallel universe with better healthcare are almost complete when Dr. Petre walks in. She takes a look in Katie’s mouth and gives me the grim assessment, ‘We can fill them or I can try to save as much as I can until they fall out,’ she says, then leans back in to probe a little. Shock floods her face for a moment and she smiles at me. ‘These teeth are completely hard! How is this possible??’

‘Well, I’ve been using that Cure Tooth Decay protocol in your waiting room for a couple of years.’

‘This is what we preach day after day but almost no one actually does it! You are a good mama!’ ***Blush***

Understanding the words coming out of her mouth feels like solving quadratic equations while birthing a baby. They look so decayed and crumbly, but Dr. Petre tells me that Katie’s teeth are healthy and strong. A stained, crusty layer of decay is all that’s left of her “weak” teeth, and in just 15 minutes she’s polished most of it off.”

Here she on Easter, just a couple months before I took her to the dentist.

And here she is on the day we got home from our appointment. She’s wearing the same dress because **someone** was so excited to document her new smile that they put her in their favorite dress.

Dr. Petre wasn’t able to get the stains off completely because the vibration from the buffer made Katie nervous, but you can see that her front teeth are even, and unlike the photo taken at 19 months the right tooth extends below the tooth directly next to it.

In just a couple of months it will be two years since that appointment, and I’m happy to say she’s still cavity free!

Two years after writing this post, I discovered that Katie had a cavity! I beat myself up about it for awhile – after all the progress we made I felt like I missed something that would have completed her healing. I’m currently working with a Nutritional Therapy Practitioner to assess whether Katie has a certain vitamin/mineral deficiency I am not aware of. Sometimes we do the best we can and things don’t turn out the way we expect. Personally, I feel that the diet was still worth it for the healing we did see, but I wanted to share this update while we figure things out.

If you’re looking for info on remineralizing teeth, Cure Tooth Decay is pretty much THE BOOK on the subject. I highly recommend it.