In this video, my lovely assistant and I will demonstrate how to make coconut milk from fresh coconut. And for those of you that like written instructions: 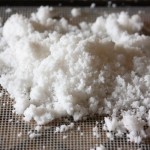 How To Make Coconut Milk From Fresh Coconut

Waste Not ~ Want Not