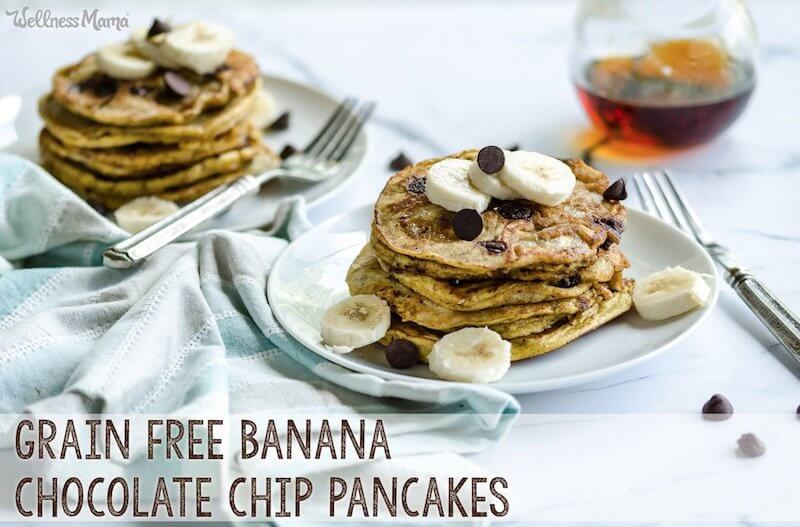 Many of us grew up eating a bagel, donut, bowl of cereal, or other grain-based, high-carb breakfast. When transitioning away from grains, it can be hard to find something to eat for breakfast. But giving up grains doesn’t mean you have to give up fun breakfasts altogether. These grain-free banana chocolate chip pancakes are a perfect (healthy!) choice when you want something sweet for breakfast.

There’s a lot of discussion and differing ideas about whether grains are okay to eat or not. Some experts say we shouldn’t eat grains since they are a relatively new addition to the human diet. Others say that grains have been a large part of our diet for thousands of years. The truth is, modern grains aren’t what they used to be, so both points of view might be true. Grains are different in the following ways:

Additionally, grains, especially white flour, can cause blood sugar spikes. There are no nutrients in grains that we can’t get from other sources. Because so many people have trouble with grains (and may not know it), it may be best to avoid grains.

That’s why I created this recipe that uses grain-free flours. The end product is similar in texture to white flour pancakes. But these pancakes are much lower in carbs and won’t cause any grain-related health issues. 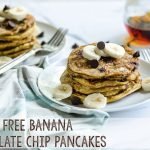 These are best eaten immediately, but if you have leftovers you can warm them in a toaster the next day.

What are your favorite kinds of pancakes?