If that’s how you feel after trying a few bleach alternative recipes, I get it. I’ve tested everything from citric acid and lemon juice to vinegar and peroxide to whiten my clothes. Peroxide alone worked beautifully for awhile . . . and then it didn’t. When we moved to a homestead with spring water a few years ago, all my whites started to become dingy. Now, I adore all the lovely minerals in my water – I just don’t want them creating a yellow buildup on my sheets!

So was I tempted to cave and treat them with bleach?  Yes . . yes I was. Here’s the deal, though: As mentioned in this article from certified Building Biology practitioner Andrea Fabry,  a study conducted at the University of Leuven in Belgium – which included 9,000 children – concluded that:

Passive exposure to cleaning bleach in the home may have adverse effects on school-age children’s health by increasing the risk of respiratory and other infections. The high frequency of use of disinfecting irritant cleaning products may be of public health concern, also when exposure occurs during childhood.”

I could seriously go on, but the bottom line is this: There are a number of reasons to be concerned about the use of bleach, both in how it affects individuals and the environment. In contrast, the recipe I’m sharing with you contains only three simple ingredients:

Finally, something that works!

Alright, back to my predicament with the yellow sheets. After a little research on homemade bleach alternatives, I discovered that the two active ingredients in store-bought oxygen bleaches are nothing more than sodium percarbonate (powdered hydrogen peroxide) and washing soda. Yep, that’s it!

I was already using washing soda in my homemade laundry detergent along with the occasional addition of peroxide, but in order to really have an effect on my whites I found I needed to increase the concentration significantly. This week, while I’m washing sheets, I decided to grab two pillow cases from my attic to show you how well it works. Here’s what they looked like before I put one in a bucket with this homemade bleach alternative – both pretty dingy!

Here’s how different they were after:

Now, it’s not magic fairy dust. Your whites will not be so bright that they practically glow in the dark and you may need to treat them more than once, but I have had great results with this recipe. 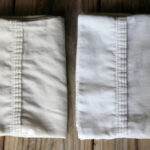 If finding a homemade bleach alternative that WORKS feels a little like hunting for a mythical laundry unicorn, I think you'll like this simple but effective recipe. It brightens clothes without harsh chemicals, and you only need a few ingredients to make it.
Prep Time 10 minutes
Servings 1 batch
Calories
Author Heather Dessinger

When life gets busy and you don’t want to DIY, you don’t have to settle for the toxic stuff. Molly’s Suds Oxygen Whitener and Eco-Me Natural Laundry Whitener Brightener are both very similar to my recipe below.

Below are answers to some of the most common questions I’ve received since first posting this tutorial.

Is this bleach alternative colorfast?

Oxygen bleach is considered color safe, but not all clothing is colorfast and therefore may be negatively affected by the bleach alternative. Thanks to my adorable helpers, color clothes (and legos) sometimes make it into a load of whites at my house, and so far it’s been fine.

Your recipe says not to use hot water. Why?

In the instructions below you’ll see that hot water is used to dissolve the washing soda, but mainly room temperature water is used.

I know this is pretty much contrary to everything we’ve been taught, but here’s the deal: Hot water weakens the active ingredient in both hydrogen peroxide and bleach. (2)

Both substances degrade over time with exposure to light/air, and heat accelerates that process. Using room temperature water is going to feel weird, but trust me, it will work out.

I have leftover washing soda. What else can I use it for?

Washing soda is wonderful in a variety of homemade cleaning products, including dishwasher detergent, laundry detergent, and scouring powder.

I have leftover hydrogen peroxide. What else can I do with it?

According to the CDC, 3% hydrogen peroxide (the kind commonly found on store shelves), “is a stable and effective disinfectant when used on inanimate surfaces.” It has to be used properly, though, and in this article I’ll cover what you need to know.

Can you recommend a fabric softener?

While a few fabric softeners get a “B” from the Environmental Working Group, the majority get a “D” or “F” in terms of safety. That’s not the only problem, though – they tend to leave a residue that serves as a breeding ground for mold and mildew. Wool dryer balls are a great alternative that soften and fluff clothes while reducing drying time.

Here’s how to make them and here’s what to buy if you don’t want to DIY.

Something else I’ve found helpful is to add plain white vinegar to a Downy Ball and toss it in with each load of laundry to soften clothes naturally.

Would this also work on tough stains? It seems like half of my kids’ clothes have stains that my homemade detergent does nothing for.

I use this recipe more as a brightener, but it may also help with stains. I do have a stain remover recipe that you could use to pre-treat stains before using this bleach alternative.

2. Hong Kong Government Information Centre. The Use of Bleach