Although all my kids love to eat, one in particular has a habit of declaring his love for everyone at the table when something hits the spot. When I really knock it out of the park he gets up from his chair and hugs each of us! He’s kind of my personal recipe rating system, and this tomatoey, cheesy adaptation of traditional sloppy joes got a big thumbs up.

It’s super easy to make with my five minute ketchup recipe, and if anyone in your family likes a bit of spice it can be topped with some red pepper flakes. I hope it gets rave reviews at your house like it did in mine. (And if it does, you can pass them along with the new recipe rating system in the comments. 🙂 ) 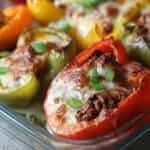