My neighbor’s have a big, sunny lot by the bay, and they have generously given my kids permission to play there anytime. It’s an easy place to while away hours – the breeze smells like fresh pine and sea salt, and there’s enough room to get a game of kickball going.

Lately I’ve been going out with them for a break in the afternoon, and I had to chuckle a little when one of them commented on the “crisp, cool weather” we are enjoying. Guys, we live in Florida, and it’s a solid 83°F outside right now. But hey, I’m all for celebrating the seasons, even if they are pretty similar to each other in this region. 🙂

That’s why lately I’ve been pulling out all the warming spices, especially cinnamon, to make all things apple – homemade cider, fritters, baked crisp, and of course these gluten-free cinnamon apple muffins.

Made with fresh apples, cinnamon and a sweet crumb topping, they’re full of flavor and seriously scrumptious. And unlike some my previous attempts, they’re moist without a hint of sogginess. I hope you love them as much as we do! 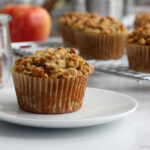