Long before Spanish explorers nicknamed California the “land of fire” due to the vast fields of golden poppies blanketing the hillsides, indigenous communities were using these gorgeous flowers for a wide variety of therapeutic uses.

You’ve probably heard of its more famous cousin, the opium poppy (Papaver somniferum), and you may be thinking that the California poppy must be a major “handle with care” kind of herb. Fortunately, while there are some safety considerations to be aware of, it’s actually considered gentle enough to use with children.

Both modern herbalists and clinical researchers often use it in ways that align with traditional wisdom – to release mental and physical tension, support deep sleep, and more. I’ll share more about its benefits below, plus safety information and recipes to get you started.

Before we dive into specifics, though, I want to remind you that that none of these statements have been evaluated by the FDA, this article is not medical advice, and it’s not meant to diagnose or treat any condition. If you have a question about whether any herb or dietary supplement is right for you, please talk with a qualified healthcare professional. Okay, let’s dive in!

What is California Poppy?

As your might have guessed by the name, they’re the official state flower of California, but they can be found growing wild all the way from Canada to Mexico.

This member of the Papaveraceae (poppy plant) family has been traditionally used by Native Americans as both food and medicine. and modern research has identified several constituents that contribute to its beneficial properties:

Yep, members of the Luiseno tribe mixed the flowers with natural tree gums to chew, and they also boiled/steamed the leaves to eat as veggies. (3) The whole plant can actually be cooked and eaten.

Other traditional uses include chewing the leaves to ease toothaches, using juice from the rootes to soothe forehead tension and stomach discomfort, consuming the root for relaxation, and using pollen for the flower in beauty treatments. (3)

Breastfeeding mothers from the Pomo tribe also applied mashed seeds topically to discontinue lactation (in the same way that many moms use cabbage leaves today). (3)

Let’s take a look at what modern research has to say about it’s benefits.

This nervine works on the physical level, directly affecting the mental state into relaxation. When your muscles can release tension, chemicals are released, often allowing the mind to shift into a more peaceful state. California poppy is helpful to take before bed or in extreme states of adrenal activation. It’s a good choice when pain is inhibiting the ability to sleep.” JJ Pursell, The Woman’s Herbal Apothecary

California poppy contains a variety of compounds – protopine and allocryptopine, for example – that have an “affinity for GABA receptors in the brain, calming the mind without depressing the central nervous system.” (4)

GABA, which stands for gamma-aminobutyric acid, is a calming neurotransmitter that helps regulate mood and sleep. Another alkaloid, N-methyllaurotetanine (NMT), is thought to interact with serotonin receptors, which may explain why it has been traditionally used for mood support. (5)

In a three months study, volunteers taking a supplement containing California poppy extract, hawthorn, and magnesium felt more relaxed and less stressed/uneasy than those who did not. (6)

California poppies tuck all kinds of people in at night – babies, children, adults . . . even themselves! At dusk they settle in for the night by closing their petals, then reopen them at dawn.

One of the longest-standing traditional uses of California poppy is to help the body and mind relax into sleep mode, especially when an overactive inner monologue and/or physical discomfort is keeping us awake. It’s sometimes taken as a tea before bed, but I like to use it in tincture form for a few reasons:

Most of the research regarding California poppy and sleep has been done with animals. For example, this one found that mice who consumed it exhibited less anxious behavior at lower doses, and went to sleep when given higher doses. (7) The study also noted that there were no toxic effects.

Though they were not conducted with randomized controls, there are a couple of human studies that demonstrated sleep benefits when California poppy was combined with other herbs/supplements. In one French study, participants who took a mixture of California poppy and valerian fell asleep faster and woke less often throughout the night. (8)

Another four-week clinical trial found that a combination of California poppy, passionflower, lemon balm, melatonin and vitamin B6 improved overall sleep quality. (9) There are some reasons to be cautious of frequent melatonin supplementation, especially with kids, but I love the herbs they chose in this formula.

Traditionally, the roots and/or leaves were chewed to ease toothaches, the roots were applied topically to injuries, and tea infusions made from the leaves and buds were sipped to soothe other types of discomfort including muscle cramps, head tension, digestive cramps, and nerve discomfort.

Although modern research has not explored all of these applications specifically, several studies suggest that California poppy does possess properties that can be helpful for soothing discomfort. For example:

Note: It’s always important to address the root cause of discomfort. Sometimes that may mean allowing muscles to rest after overexertion, and other times that may mean reaching out to a trusted healthcare professional to identify the source of the discomfort and work on a plan for resolving it.

A printable version of this recipe can be found at the bottom of this article.

Alcohol is much better at extracting California poppy’s beneficial alkaloids than water, so I prefer to take it as a tincture instead of a tea whenever possible. For me, that can mean taking it directly under my tongue, or adding it to a bedtime tea brew that includes calming herbs like chamomile, linden, passionflower, catnip or lemon balm.

The tincture formula generally recommended for California poppy is a 1:5 ratio (1 ounce herb by weight, 5 ounces alcohol by volume) in 25-60% alcohol (depending on the source) (12) (4)

However, because it’s very fluffy, I have found that I need to add a little extra alcohol to make sure it is fully submerged. Another option is to grind it a little before adding alcohol so that the herb is more compact.

Pour the alcohol over the herbs, then cover the jar with a lid and shake it well. If desired, write the start date on the jar using a sticky note, label, or piece of tape – it makes keeping track of how long it’s been steeping easier.

Place the jar in a dark, room temperature area. (I keep mine in a kitchen cabinet.) Let the mixture steep for 3-4 weeks. Shake occasionally.

When the tincture is ready, use a mesh colander or cheesecloth to filter out the herbs. Pour the tincture in a clean jar or dropper bottle and store it in a cool, dark area.

When using a tincture made with 25% alcohol, Medical Herbalism suggests “1 to 4 ml at night” for children’s sleep support.

Because it’s rich in alkaloids, California poppy tea tends to be a little bitter and is usually enjoyed with a bit of honey or other sweetener. You’ll find the recipe below, along with a printable version at the bottom of this article.

To Make: Pour 1 cup of boiling water over the herb, cover and infused for 10 minutes. Strain out the California poppy and sweeten to taste if desired.

Suggested servings for adults and children: For adults, Medical Herbalism suggests one cup at night using the recipe above to promote restful sleep.

In Making Plant Medicine, Richo Cech recommends cutting his basic tea formula in half for children. His formula isn’t as standardized as the one above due to the variations in size and quality of different herbs, but if I am reading his recommendations correctly, an adult serving would be 1-2 grams by weight per cup of water, and a child’s serving would be 1/2-1 gram per cup of water.

The Botanical Safety Handbook (2nd Edition) classifies California poppy as a Safety Class 2b herb, which means it is not recommended for use during pregnancy. Because it was traditionally used to decrease milk supply, many herbalists also advise against using it while breastfeeding.

Unlike nourishing herbs such as nettle, California poppy is best taken on an as-needed basis rather than as part of a daily routine. Many herbalists suggest using for 2-3 weeks and then taking a break for awhile. During the break other relaxing herbs can be rotated in. 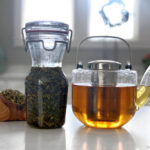 Learn how to brew a relaxing cup of California poppy tea or create a tincture that can be taken directly or added to your choice of drink.
Prep Time 5 minutes
Calories
Author Heather Dessinger