Mommypotamus » Health » 10 Benefits of Nettle Tea + How To Make It

“When in doubt, use nettle.” << Spoken by renowned herbalist David Hoffman, this bit of wisdom has benefitted my family more times than I can count. (1) Often called Nature’s Multivitamin because it contains so many nourishing vitamins, minerals, and antioxidants, stinging nettle (Urtica dioica) supports a wide variety of essential functions in our bodies.

Now, if you’ve ever encountered it in the wild, you may not be sure you want nettle in your kitchen. As someone who regularly felt its sting growing up I get it, but in this article I’ll dive into why I now consider it an essential part of my First Aid + Natural Remedy Kit, and why you might want to also.

As always,  I want to mention that none of these statements have been evaluated by the FDA, this article is not medical advice, and it is not meant to diagnose or treat any condition. Please talk with your healthcare provider about any herbs you are considering. Now that we’ve got that out of the way, let’s dive in.

Stinging nettle’s scientific name, Urtica dioica, comes from the Latin word uro, which means “to burn,” because it’s covered in tiny, stiff hairs that cause a temporary burning sensation upon contact.

Fortunately for us, cooking or drying out nettle deactivates the formic acid that causes the stinging sensation, leaving us with the other nutritive compounds to work with. That’s not to say that the formic acid isn’t considered therapeutic by some – it’s actually used been topically in studies to ease joint discomfort. (2)(3)

Originally native to Europe, Asia and North Africa, nettle is now found worldwide including New Zealand and North America. The leaves and roots have a long history of use as a traditional medicine, food, and raw material for making textiles.

Despite nettle’s sting, most herbalists will search high and low for a yearly supply of this valuable herbal tonic.” JJ Pursell, The Herbal Apothecary

Nettle contains so many beneficial compounds that it’s impossible to list them all here, but here are some of the most significant ones and how they benefit the body:

Minerals are the spark plugs of our bodies. They act as cofactors for enzyme reactions, contract and relax muscles, transfer nutrients into our cells and conduct messages from our nerves along with other jobs like forming the structure of our bones and regulating pH.

“Nettle is full of nutrients that are important for healthy bones, teeth and hair,” writes Rosalee de la Foret, author of Alchemy of Herbs. She adds that it has “approximately 2,900 mg of calcium for each 100 grams of the dried leaf” that is “easily absorbed by our bodies (which is not the case when it comes to calcium supplements.)”

When my son broke his wrist, I made him a Bone Support Tea with nettle, another mineral-rich herb named oatstraw, and peppermint leaf (for flavoring) to support his recovery.

We know that excessive amounts of free radicals – which our bodies produce as byproducts of metabolism – cause oxidative stress that can lead to accelerated aging and several disease processes. Fortunately, as this Live Science article puts it,

Nettle is rich in a wide variety of constituents that act as antioxidants, including vitamin C, polyphenols (kaempferol, quercetin, caffeic acid, coumarins), and pigments (provitamin A beta-carotene, lutein, luteoxanthin and other carotenoids). (5)

Many people think of detoxing as something you do on rare occasions, perhaps with the aid of green smoothies and a restrictive diet. In truth, detoxing is a critical function that happens every moment of every day in the cells of your body. The best way to promote healthy detoxing is to give regular support to your major detox organs to do their job well.

Medical herbalist David Hoffman agrees, saying that “Throughout Europe, nettle is used as a spring tonic and general detoxifying remedy.” (9)

Nettle is rich in flavonoids like quercetin, which studies suggest may support the stabilization of mast cells (the immune cells that release histamine). (10)

You’ve probably heard of antihistamines before – the over-the-counter medications that are sold to relieve allergy symptoms (sometimes called hay fever or allergic rhinitis).

To understand how histamines work, think of your body as a bathtub, histamines as water and your ability to break them down as the drain.

When our bodies encounter pollen, grass, mold, cedar, ragweed, pet dander, dust mites and other airborne compounds, our immune system may see them as invaders or irritants that need to be dealt with. It then triggers the release of histamines which increases blood flow to the affected area, causing inflammation, symptoms like sneezing, and sometimes the production of mucus.

The sneezing/coughing/mucus helps clear the irritant away and histamines job is done, so your body breaks it down . . . . usually.

Sometimes, though, the body’s drain is clogged or the body over-produces histamine. By supporting the stabilization of mast cells (which produce histamine) and assisting with detoxification (more on that below), nettle is considered a go-to by many herbalists for easing seasonal discomfort.

In addition, it contains an alkaloid compound called synephrine that is used in traditional Chinese herbal medicine for seasonal issues. (11)

“Because of its nutritive properties and positive effects on the liver, nettle is also an excellent tonic for the reproductive system of both men and women.” (1)

Nettle has long been used to nourish the adrenal glands, which are often put to the test during the pregnancy and postpartum period.

It’s also thought to reduce the discomfort of labor and birth and nourish the kidneys, which are responsible for cleaning the extra blood required to sustain pregnancy. (12)  You can find my pregnancy tea recipe that includes nettle here.

JJ Pursell, author of The Herbal Apothecary, also lists it as a galactagogue, or herb that increases breastmilk production.

Note: Some sources say that nettle should not be consumed by pregnant women because it can cause uterine contractions. However, The Botanical Safety Handbook – which is a trusted source for evidence-based herbal information – lists it as having “no identified concerns for use during pregnancy or lactation.”

Many midwives and herbalists actively encourage nettle leaf intake during pregnancy because they believe it nourishes and tones the uterus in preparation for birth. It’s included in many pregnancy teas sold by respected herbal companies.

Nettle supports the production of both red and white blood cells, which help keep the blood, body and immune system functioning well. (13)

It’s also rich in vitamin C, which according to this study supports “various cellular functions of both the innate and adaptive immune system.”

Our bodies don’t make vitamin C, so the only way to optimize levels is through dietary intake. Heat typically destroys it, but this study found that steeping stinging nettle leaves for 10 minutes in water at a temperature of 122–140°F (50–60°C) optimally extracted the vitamin C while keeping it intact.

Nettle is a rich source of potassium, which helps maintain healthy blood pressure by stimulating the release of sodium via urine and easing tension within the walls of blood vessels. (17)

In one study, consumption of nettle for eight weeks also had a positive impact on HDL cholesterol (the “good kind”l) and nitric oxide levels. (18)

Nitric oxide is a vasodilator, which means it relaxes the inner muscles of your blood vessels, causing them to widen. This vasorelaxation effect increases blood flow and lowers tension within blood vessel walls.

Nettle is used both internally (as a supplement or tea) and externally (as a topical skin infusion) to soothe skin irritations, especially in acne-prone or eczema prone skin.

The nettle tea recipe below can be dabbed on skin with a cotton ball in the same way that you would apply an astringent. However, as with all skincare products, it’s recommended that you apply it to a small area of skin to be sure you don’t have a skin sensitivity or allergic reaction to nettle before applying it to the desired area.

Because of its high mineral content (especially silica) and ability to encourage blood flow, nettle leaf tea is sometimes used as a hair rinse to encourage thickness and shine.

To use, brew the tea below and allow it to cool, then pour it over your hair after shampooing. Wrap your head in a towel and allow it to infuse for 15-20 minutes, then rinse and condition if desired.

Does Nettle Tea Have Any Side Effects?

According to the Botanical Safety Handbook, 2nd edition, it’s a Safety Class 1A herb – the safest rating possible. It is described as:

The handbook notes that no drug or supplement interactions had been identified (at the time of publication) in clinical trials, case reports or animal trials. I’m not aware of any that have been identified after publication, either, but some herbalists think it might possibly interact with some medications.

For example, in Medical Herbalism David Hoffman writes that “Internal use may theoretically decrease the efficacy of anticoagulant drugs.” (8)

Also, it may increase the effect of some medications. Nettle is considered a mild diuretic, which means it helps the body get rid of excess fluid and salt (aka water retention). If you’re on a prescription diuretic, nettle may enhance its effects and potentially lead to dehydration.

Also, if you’re using  fresh nettle leaves, keep in mind that “It is not recommended that nettle leaves be eaten after the plant has gone to flower/seed.” (8) 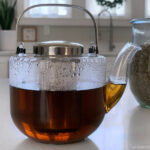 David Hoffman, author of Medical Herbalism, recommends making nettle infusions by steeping the herb in boiling water for 10-15 minutes. With this approach you’re able to optimally extract some of the hard-to-get beneficial compounds such as tannins.  However, if you want to focus on preserving vitamin C content, use water that is between 122–140°F (boiling is 212°F) and steep for 10 minutes. Personally, I get vitamin C from a wide variety of sources, so I focus more on extracting the other polyphenols, amino acids, minerals and pigments that are present.  Long Infusion Instructions To make a long infusion that extracts more of the minerals, fill a quart-sized heat-proof jar about 1/4 full of dried nettle. Pour boiling water into the jar until the nettle is covered and the jar is mostly full. Stir, cover with a lid and let steep for 4-8 hours, then strain and drink.

Elderberry Tea – Renowned for their health benefits such as supporting immune and cardiovascular function, elderberries are delicious when brewed into an antioxidant-rich tea.

Roasted Dandelion Root Tea – This rich, creamy tea is so yummy that I always make a double batch – one cup for me, and one to replace that cup when my littles steal away its deliciousness. 🙂 It’s helpful for balancing hormones, detoxification, and digestion.

Lemon Balm Tea – Lemon balm is gentle yet potent, making it perfect for use with kids & adults for a mood lift, supporting relaxation and deep sleep, first aid, and more.

It has a mellow, hay-like flavor similar to green tea. It blends beautifully with a bit of honey and/or more flavorful herbs like peppermint.

What are some other ways I can use nettle leaf?

Add it to soups and stews to increase the nutritional content. I like to add 1-2 tablespoons to this Instant Pot Chicken Soup.

16. Ziaei, Rahele et. al. (2019) The effect of nettle (Urtica dioica) supplementation on the glycemic control of patients with type 2 diabetes mellitus: A systematic review and meta-analysis

17. Medical News Today. What can people do to lower diastolic blood pressure?