When my littlest turned two and “Happy Birthday” had been sung and candles had been blown out, he turned to us and asked for a fork.

To eat the cake. His cake. Like, the whole thing.

This year, he requested the same recipe from Jenni Hulet’s cookbook – My Paleo Patisserie – only with three smaller layers instead of one large one. My daughter made it with me, and I’m so happy with how it turned out.

Spiced with cinnamon, nutmeg, and ground ginger and wrapped in a thick layer of frosting, this is the kind of gluten-free carrot cake you don’t know you need until you try a piece (or three).

Moist and decadent, it was just as delicious as we remembered . . . and Jenni has graciously agreed to let me share it with you.

Why I Love My Paleo Patisserie

When I first cracked open a copy of Jenni’s book I wasn’t sure if it was a cookbook, an art book, or a coffee table book. Turns out, it’s something else entirely.

My Paleo Patisserie is a “Choose Your Own Adventure” book. There are mix-and-match options so you can pair a chocolate eclair with pistachio pastry cream and a chocolate fondant glaze, or you can nix the pistachio and go with a praline cream. What kind of glaze? Maybe raspberry, espresso or maple. You decide.

Now, I’m going to be straight with you. I love Jenni – and not just because she use to stop by my house with a plate of homemade marshmallows every now and then – but I didn’t think this book was for me. I am not a food artisan. I am a mom who fist pumps every time I discover a delicious recipe that can be made in under five minutes.

But you know what? I was wrong – this book is for everyone. If you married a Paleo Pastries for Dummies with a five star chef’s cookbook, you’d have My Paleo Patisserie. And more importantly, you’d have eclairs and tiramisu.

Yes, it takes more than five minutes, but you know what? It’s so much better than baking a cake which your friends politely remark “must be healthy.” That’s crunchy mama code for “Your food tastes like a yoga mat,” by the way.

My Paleo Patisserie is currently out of print, but you can grab the Kindle version here. 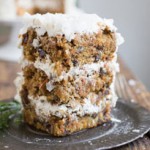 For the buttercream frosting:

To Make The Carrot Cake:

To Make The Buttercream

To Assemble The Cake

*To substitute ghee, use an equal amount by weight. If measuring by volume (cups), reduce the amount of fat used to 1 cup plus 2 tablespoons. For this recipe you will need three 6-inch (15-cm) round cake pans, as the recipe is written for that amount of batter. However, this amount of batter will also make one 9-inch (24-cm) round cake for a nice single-layer cake if desired.

Can I use a gluten-free flour blend instead of almond flour?

Almond flour absorbs liquid differently than gluten-free all-purpose flour and will not work in this recipe.

What can I use instead of palm shortening for the cake?

Ghee will work. Use an equal amount by weight. If measuring by volume (cups), reduce the amount of fat used to 1 cup plus 2 tablespoons.

Gluten-Free Lemon Bars – Tart and sweet, these bars are like little squares of sunshine on a plate. They’re made with a chewy, lemon-zest infused crust that’s topped with an extra-thick layer of melt-in-your-mouth creamy lemon filling.

Paleo Chocolate Cupcakes With Dairy-Free Cream Cheese Frosting – This recipe from Michele of Paleo Running Momma uses coconut and cashews to create an alternative to cream cheese frosting, and the results are so yummy.