Is there anything quite like tomatoes fresh off the vine for making a batch of fresh salsa or a juicy BLT with homemade mayo? That was a rhetorical question, of course. This time of year you can often find great deals on tomatoes at your local farmer’s market . . . I once got 20 pounds for $20! Or maybe you’ve got garden or a friend who brings extras over by the bucketful – even better.

Whatever the reason, if you’ve got extras on-hand, here’s how to make them into delicious oven-dried tomatoes. Like their more famous cousin, sun-dried tomatoes, these little morsels are delicious in pasta, salads, quiche and other recipes. However unlike sun-dried tomatoes, you can make these in just one day without worrying that your efforts will be spoiled by a surprise summer rain shower.

Oh, and if you ask me the oven-dried versions are much tastier, too.

What kind of tomatoes should I use?

I like to use cherry tomatoes or grape tomatoes because they require the least amount of work. They’re also naturally sweet, making them a sweet and savory snack when dried. However, you can use whatever you have on hand: heirloom, roma, or plum tomatoes.

Here’s something to keep in mind as you choose your variety:  Tomatoes with smaller seeds and/or less water probably don’t need to be de-seeded. However, many people choose to remove the seeds from larger, juicier tomatoes.

Some people believe the seeds make the dried tomatoes bitter, while others say they make no difference at all or enhances the flavor. It’s really up to you what you want to do. I’m a seeds-in girl, but I recommend trying it both ways to see how you like it.

How to Use Oven-Dried Tomatoes

The best thing about oven-dried tomatoes is how versatile they are. Here are some ways to use them:

They’re also amazing on their own as a snack on the go!

Can I use a dehydrator instead of the oven?

Yes, you can use a dehydrator instead of an oven. A dehydrator may take a little longer, but it also may make for more evenly dried tomatoes. Dehydrators also use less energy and are easier to get very specific temperatures and airflow. I have an Excalibur, which is considered the gold standard for dehydrators. I use it for jerky, fruit leather, apple chips, etc.

However, the oven works just fine if you don’t have a dehydrator.

Tips for Making Delicious “Sun-Dried” Tomatoes In Your Oven

Luckily dried tomatoes are fairly easy to make. But here are some tips to help you make them as tasty as possible.

Dried fruits and vegetables can be stored at room temperature, but if they aren’t completely dried they can spoil. If you store them in the refrigerator or freezer they will last a long time. 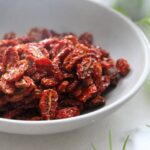 Feel free to use various dried herbs for seasoning if desired.

What is your favorite way to use dried tomatoes?

Prev Post Melatonin for Sleep: Does It Work & Is It Safe for Kids?
Next Post Easy Gluten-Free Waffles Recipe (With Almond Flour)