Pumpkins are the official herald of fall, even on the beach where we wear shorts to the pumpkin patch.:) A few days ago I made my first pumpkin spice latte of the season this week and – just for fun – decided to do a taste test challenge between canned pumpkin and homemade pumpkin puree.

It was no contest – fresh pumpkin puree all the way. The flavor is sweeter, richer, and pure pumpkin, which can’t be said for some canned versions that use different types of squash as filler.

Now, maybe you’re thinking that homemade pumpkin puree sounds nice in theory, but also sounds like a lot of work – it’s not! At least not if you do it using my easy three step method:

Yep, that’s it. Most recipes call for cutting the pumpkin in half and then placing the cut side down on a baking sheet before popping it in the oven. However, I’ve found that it works just as well to skip all those steps and just pop the whole pumpkin in.

Tip: How To Keep Fresh Pumpkin Puree On Hand

The great thing about canned pumpkin is, of course, that you can stash it in your pantry until you need it. Since making puree isn’t possible every time I want to make a latte, I make a big batch at the beginning of fall and then freeze it in ice cube trays so that I can pop out just what I need when I need it.

Ways To Use Homemade Pumpkin Puree 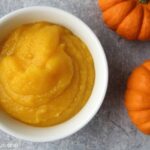 How To Make Pumpkin Puree From Scratch (Easy Method)

How much pumpkin puree will this make?

It depends on the size of the pumpkin you start with. When I use one small pie pumpkin it usually yields at least three cups.

How long does this pumpkin puree last in the fridge or freezer?

Up to 1 week in the fridge and 3-6 months in the freezer.

What kind of pumpkin should I use?

However, the pumpkins used to make Jack-o-lanterns will also work. If they’re very large you probably won’t be able to fit them in your oven whole. If needed, cut them in half and place them cut-side-down on a baking sheet before roasting.