Does The Thought Of Going Grain-Free . . .

Make you woozy? Do you wake up and think “man, I need to make some changes” and then go “ohhhh, waffles!“

I can relate. No seriously, the day Daddypotamus came home and told me he wanted to start GAPS was the actual day we started and, um, I can’t say I didn’t sneak into the garage to indulge in a few GAPS “illegal” foods from time to time. Nursing mamas can’t go hungry just because they don’t know how to cook by the new “rules,” you know?

Fortunately a friend helped me get the hang of things and life was humming again soon. We found fresh versions of old favorite dishes, made some surprising culinary discoveries, and best of all felt better.

Did I tell you we felt better?

Oh yes, all of us. Now that we’ve incorporated grains back into our diet we still feel great – the journey was totally worth it!

Are You Ready To Give Grain-Free A Try?

Oh, what’s that? You’re worried about eating fish because the media says fish are loaded with mercury, toxic PCB’s and dioxins? I get that.

The thing is, they’re flat out wrong. As it turns out, most fish contain levels of selenium that are higher than whatever mercury they contain. When this is the case the selenium binds with mercury and prevents absorption, leaving us with all the health benefits and yummy goodness of pan-fried, seared, blackened and broiled FISH!

Oh and those PCB’s and dioxins? According to Chris Kresser:

While it makes perfect sense to try to avoid these toxins to the greatest extent possible, abstaining from fish isn’t a particularly good strategy.

The highest dietary sources of PCBs and dioxins are not fish, but beef, chicken and pork (34%), dairy products (30%) and vegetables (22%). Fish constitute only 9% of our dietary intake of these chemicals. (where to buy 100% grass fed beef)

There are exceptions, of course. Certain fish and seafood – like pilot whale, tarpon, marlin, swordfish and some shark – are naturally low in selenium but contain moderate amounts of mercury. Freshwater fish from contaminated inland sources can also contain high levels of PCB’s and dioxins (thanks Monsanto!). On the whole, though, eating fish is actually safer than not eating it! (Update: Please read the comments for possible regions to avoid)

Grouper just so happens to be rich in selenium, yay! If you’ve been on the fence about going grain-free give this recipe a try – it just may be a new favorite! 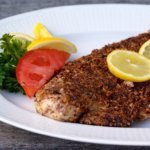 Click Here To Learn More About The Go Grain-Free eCourse!