I’ve been using my 3-ingredient homemade laundry detergent recipe for years now and am so happy with it – it’s affordable, easy to make, and if you read the comments you’ll see that it really gets clothes clean.

Part of the trifecta blend is washing soda, which can be used throughout the home as a cleanser, degreaser, deodorizer, build-up remover, and water softener.

I can usually pick it up in the laundry aisle at my local grocery store, but sometimes they run out . . . usually when I am behind on laundry, too. Also, a lot of you have reached out because you can’t find it locally, or you can only buy the kind sold in big plastic buckets instead of the brand that comes in eco-friendly recycled cardboard and want a better option.

With that in mind, I’m going to show you a super easy method for making washing soda from baking soda.

So, what is washing soda?

Washing soda has been used for a long time to clean laundry and around the house. It’s rich in sodium and can be made from the ashes of seaweed, kelp and other vegetation, though these days it’s usually derived from limestone.

I promise not to dive too deep into this part, but from a chemistry standpoint it’s very similar to baking soda:

How does a few extra molecules affect cleaning power?

It all comes down to pH.

Baking soda has a weaker (more neutral) pH, which makes it less effective for some types of cleaning. Washing soda, on the other hand, has a higher pH, which can boost cleaning power in many situations.

Fortunately, when baking soda is heated to a certain temperature, it releases those extra carbon dioxide/water molecules and becomes washing soda. We’ll dive into a super simple method soon, but first you might be wondering if there’s much you can actually do with it.

5 Ways To Use Washing Soda

Once you have a batch of this stuff, you can put it to work in your laundry room, kitchen and bathrooms. Here are some of my favorite tried-and-true ways to use it:

When when the Environmental Working Group analyzed one of the most popular scouring powders on the market, they found that it:

“emitted 146 different chemicals, including some that have been linked to cancer, asthma and reproductive disorders. The most toxic chemicals detected – formaldehyde, benzene, chloroform and toluene – are not listed on the label.” (1)

Skip it and make your own instead with this super quick and easy recipe.

If you’ve ever tried making homemade dishwasher detergent and been disappointed with the results, chances are you were closer to a great recipe than you thought!

Most DIY formulas use the same basic ingredients, but there’s a trick to getting them to work. Details + my super simple recipe can be found here.

I used to think that washing machines were self-cleaning: Just toss in your dirty clothes, a scoop or two of laundry detergent, and the machine cleans the clothes AND itself, right?

Both top-loaders and front-loaders can develop buildup from soap scum and hard-water deposits, and they’re vulnerable to mold and mildew, too. Here’s how – and how often – to clean your machine with washing soda and a few other ingredients.

If you’ve ever searched around for laundry detergent recipes online, you’ve probably seen ones that have five, six or even seven ingredients. It may seem like they’d be more effective than ones with just two or three, but simplicity really does work in our favor here. Here’s how to make laundry detergent with just a few ingredients.

What To Buy If You Don’t Want To DIY

How To Make Washing Soda From Baking Soda

Although it’s not actually alchemy, making washing soda is super easy and feels kind of magical to me. I usually start a batch just after dinner while my oven is still warm from cooking.

Step2: Spread 2-3 cups of baking across a large baking dish or baking sheet.

Step 3: Bake for about an hour, stirring well at least once around the halfway mark. The baking soda needs to reach 400F in order to convert to washing soda, so the exact amount of time needed will vary based on whether your oven runs hot or cold, and how thick the baking soda layer is in your pan.

It may be helpful to compare your washing soda with baking soda to see the difference until you get a feel for how long the conversion takes with your oven.

Store your homemade washing soda in an airtight container.

Homemade Stain Remover – I’ve used this stain remover on ketchup, grass stains, oil stains, and those mystery stains you don’t notice until something has already been washed and dried.

There are before and after photos in the post, and I’ve listed two non-toxic options you can buy if you don’t want to DIY.

Vinegar + Hydrogen Peroxide All-Purpose Cleaner – Non-toxic and affordable, hydrogen peroxide is classified by the CDC as “a stable and effective disinfectant” for hard surfaces. When used in tandem (but not mixed with) vinegar it becomes part of a dynamic duo that food scientist Susan Sumner described this way:

If the acetic acid [active component of vinegar] got rid of 100 organisms, the hydrogen peroxide would get rid of 10,000, and the two together would get rid of 100,000” The method in this article was pioneered by Sumner while she was working at the University of Nebraska. 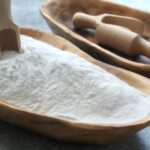 How To Make Washing Soda From Baking Soda

It's not alchemy exactly, but with just your oven and a baking dish you can convert baking soda to washing soda. Once it's ready, use it to deodorize, whiten laundry, remove build-up, soften water, and more.
Prep Time 5 minutes
Bake Time 1 hour
Calories
Author Heather Dessinger

How To Know Your Washing Soda Is Ready