Non-toxic and affordable, hydrogen peroxide is classified by the CDC as “a stable and effective disinfectant” for hard surfaces. (1) It can brighten laundry, clean mirrors, and more. I’ve already covered many of the ways it can be used around the house, but in this article I’m going to show you how to increase its effectiveness by using it in tandem with vinegar.

The operative phrase being “in tandem with,” not “combined with.” That’s because this dynamic duo only works when used together . . . separately. That’s because if you combine the two in the same container, they form a new compound called peracetic acid, which can corrode surfaces and irritate skin, eyes and the respiratory system.

However, when used together properly, they’re more powerful than when used alone.

That’s a big deal because unlike chlorine bleach – which gets and “F’ safety rating from the Environmental Working Group – both hydrogen peroxide and vinegar have an excellent safety rating. Hydrogen peroxide breaks down into water after it disinfects, and white vinegar is well, edible. (You can also infuse vinegar with leftover citrus peels to give it extra cleaning oomph.)

The method below was created by Susan Sumner, a food scientist, while she was working at the University of  Nebraska. She deliberately contaminated fruits and vegetables with either salmonella, shigella, or E. coli O157:H7, then followed up with a squirt of vinegar and/or hydrogen peroxide.

Though the hydrogen peroxide did pretty well on its own, the two together delivered a one-two punch that was even more effective.

She noted that in addition to working on produce, the method was works well for “sanitizing counters and other food preparation surfaces — including wood cutting boards.”

Something to keep in mind, though, is that vinegar is acidic and to a smaller degree so is hydrogen peroxide. Although hydrogen peroxide is considered safe for occasional use on granite countertops (and some marble), vinegar is not recommended at all.

Undiluted 70% rubbing alcohol is less acidic than water and is effective against certain microorganisms, says the CDC and Consumer Reports, so that’s another option to consider. (3) (4). They note that it’s generally safe for most surfaces although it may discolor some plastics, so that’s an option to consider if you’ve got granite or marble surfaces. (3)

Also, although it’s a cleaner rather than a disinfectant, if you have granite counters this recipe might be helpful. 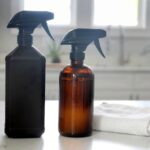 * Apple cider vinegar is not recommended because it may stain some surfaces.

Homemade Laundry Detergent –  Here’s what Hillary had to say about this recipe: “My husband does mechanical work for a logging company and his clothes get REALLY dirty after crawling in, on, and under those greasy machines! I think the detergent cleaned it better than our natural detergent we were buying from Costco! I was very impressed, thank you! : )”

DIY Hand Sanitizer – When soap and water are not an option, I use this super easy hand sanitizer that aligns with the formulation guidelines provided by the Centers for Disease Control (CDC).

22 Baking Soda Uses for Cleaning, Personal Care & Remedies – Baking soda is incredibly versatile, so I put together this guide to using it around the house, in personal care, and more.

Prev Post How To Make Fizzy Elderberry Soda
Next Post Vegetable Gardening for Beginners: Tips & How To Start