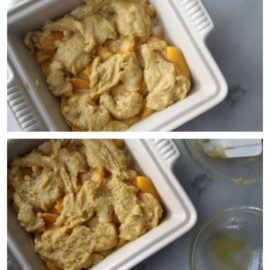 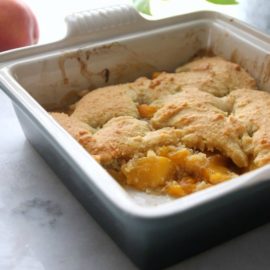 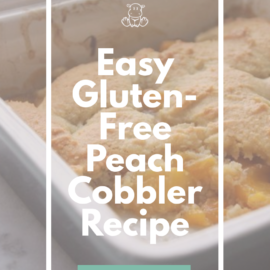 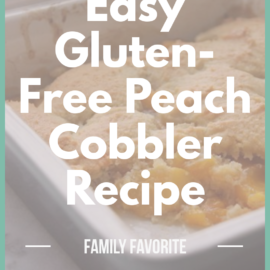 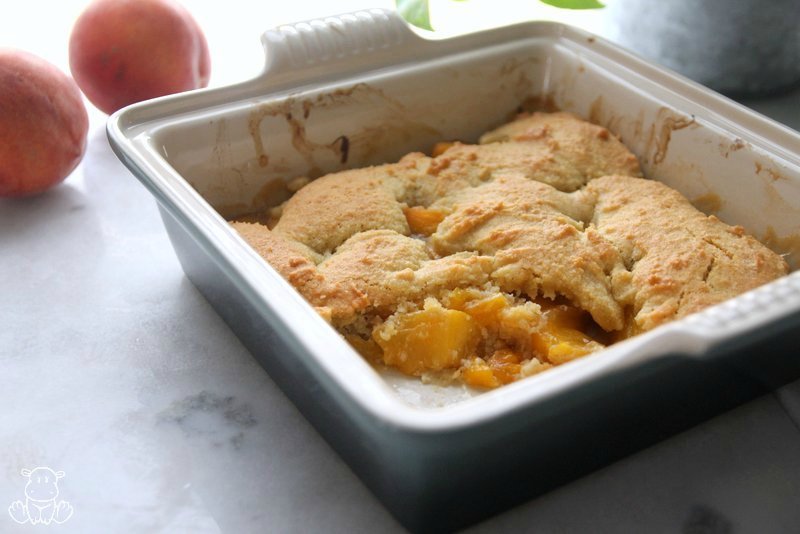 “Hey, if you have any produce that is too ugly to sell, set it aside for me and I’ll buy it next week.” <– Over the years, that little phrase has yielded so many awesome deals at my local farmers market. Twenty pounds of tomatoes for twenty bucks, buckets of cucumbers for pickling, and loads of fresh herbs. It works for sweet, juicy peaches, too . . . the ones that aren’t perfect, anyway.

We eat all we can and I preserve the rest by dehydrating them for snacks or making peach freezer jam. Getting back to the “eat all we can” part, though, this Southern-style, gluten-free peach cobbler is one of our favorite summer desserts.

I have always loved the look of cobbler. It’s rustic and homey – always inviting you to take another bite. Rumored has it that it’s named “cobbler” because the topping is cobbled together over the fruit in a way that resembles old-fashioned cobble stone streets.

Unlike the version from my childhood – which was topped with Bisquick – this recipe melds the light buttery flavor of these gluten-free homemade biscuits (slightly adapted) with cinnamon, vanilla, and heaps of naturally sweetened peaches. It’s easy to make, too. I can easily throw it together in a pinch for guests when I’m short on time. 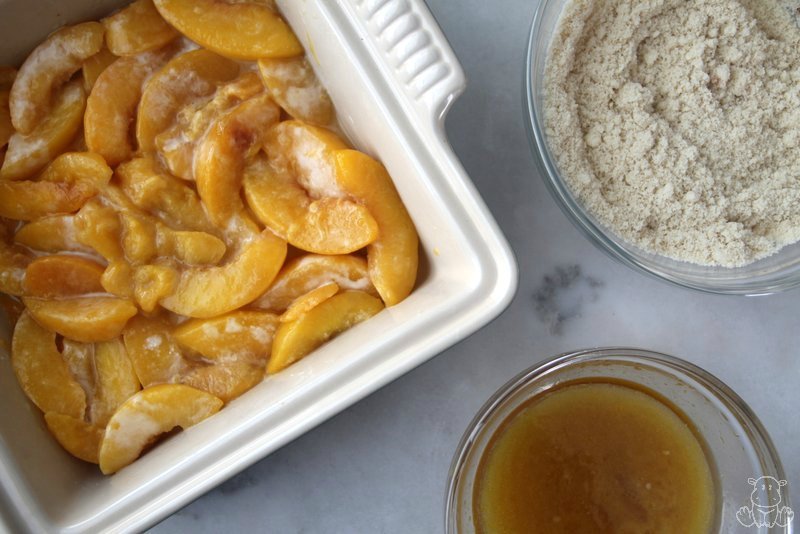 Peach filling mixture with topping ingredients ready to be mixed together

Because it travels well, it’s also great for picnics, potlucks, and family get-togethers. Top it with a dollop of whipped cream or a scoop of fresh homemade vanilla ice cream, or let it shine on its own. (It will!)

When I scoop spoonfuls of the topping over the peach mixture before baking, I leave a little space between the spoonfuls. This method allows some heat to escape from the peach mixture during baking, which prevents the peaches and topping from “steaming” and becoming soggy. I also think it’s pretty to have some of the peaches peeking out, too.

After I spoon the batter over the peaches, I smooth it out a little bit with a spatula. (See photos below.) 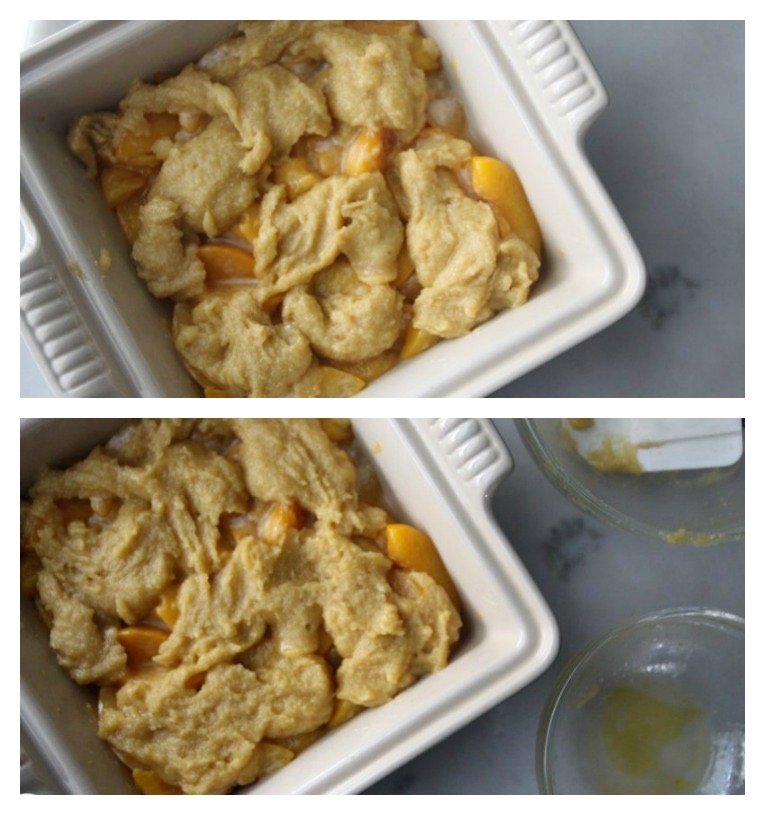 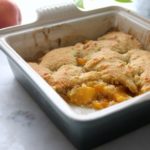 To make the peach filling:

To make the topping:

Bringing it all together: 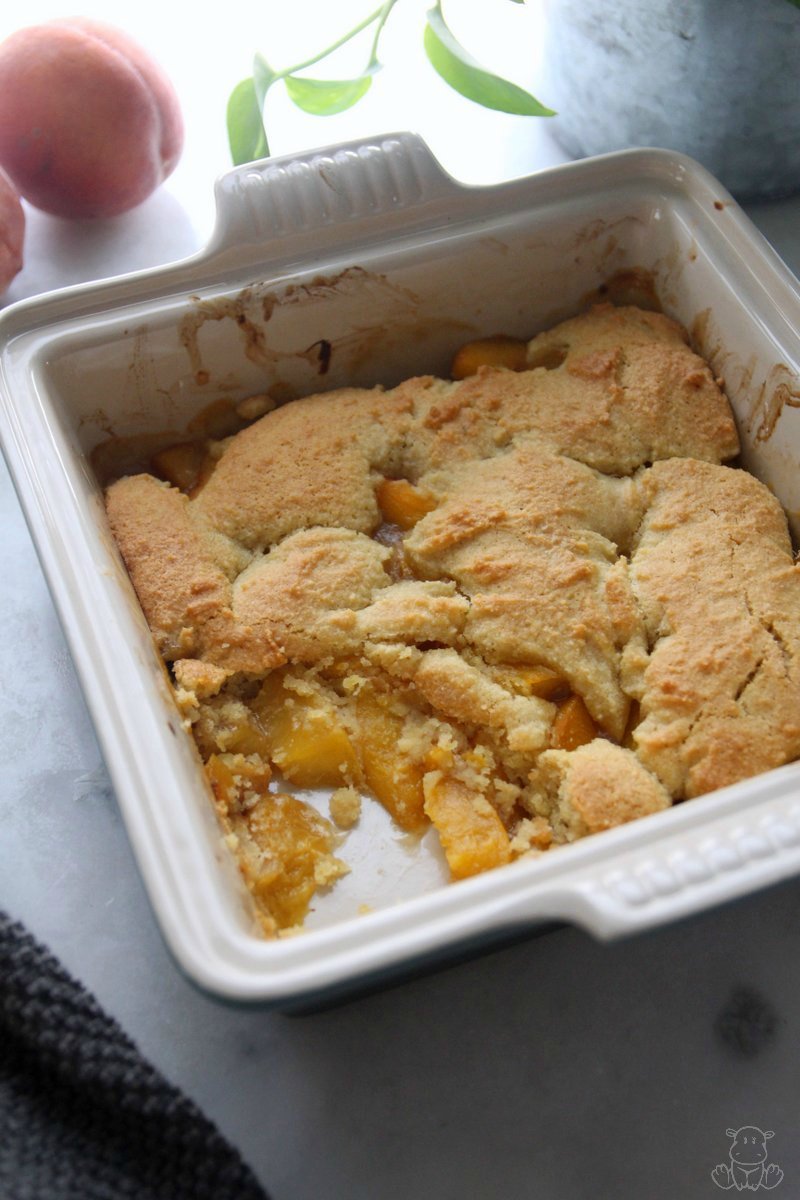 AIP Baked Peaches & Plums With Vanilla – This recipe is proof that desserts don’t have to be complicated to be delicious!

Fruit Pizza Recipe – The  cookie crust of this fruit pizza is soft and buttery, yet sturdy enough to pile a lot of fruit on. I’ve also included a recipe for light and fluffy homemade whipped topping.

Cherry almond ice cream -This recipe was a happy accident of sorts. I promised my littles a movie and homemade ice cream, then damaged my rotator cuff while paddle boarding. If you’ve ever broken a promise to three excited kids, you know exactly what happened next. I made the ice cream with one arm. Basically, I dumped a bunch of stuff in the ice cream maker and hoped for the best, and this is what came out!

Prev Post Moisturizing Homemade Body Wash (3 Ingredient Recipe)
Next Post Melatonin for Sleep: Does It Work & Is It Safe for Kids?