Creamy and luxurious, this shrimp bisque is a copycat version Pappadeaux Seafood Kitchen’s crawfish bisque, which just so happened to be one of my top two favorite meals when I waited tables there during college. (This seafood fondue was the other.)

Somewhere between all the double shifts and the late night closings I befriended one of the cooks, and although he didn’t give me the exact recipe, he gave me some hints for which I am most grateful.

Unlike most of my recipes – like this quick egg drop soup and these chicken nuggets – this one takes a little time to prepare, but it’s oh-so-worth-it and nothing is wasted. Shrimp shells are simmered with butter and paprika to create a flavorful, briny broth that serves as the base for the soup. Rich cream is then added along with bay seasoning, ripe tomatoes and a touch of sherry with chopped shrimp folded in. It’s so good just typing this inspired me to add it onto next week’s meal plan – I hope you love it as much as we do.

Also, quick tip: Stash an extra bowl for yourself in the back of the fridge for later. It’s yummy cold, too. 🙂 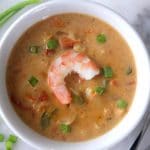