This Instant Pot bone broth recipe is so much easier than babysitting a pot on the stove top for 12+ hours, and it’s the perfect way to make use of bones from a leftover roast chicken. Of course, you can also use beef marrow bones, lamb bones or pork bones – I’ve included instructions for all four in this article.

Before we dive into the recipe, though, let’s talk about why it’s totally worth it to make homemade bone broth . . . and what to buy if you’re short on time.

As I mentioned in this tutorial on making bone broth in a slow cooker, it contains:

It’s budget-friendly, too. Using ingredients that would otherwise be wasted, you end up with a  a delicious, nutrient-rich base for lots of different recipes.

If you want more tips for eating healthy on a budget, I’ve put together everything I’ve learned over the years here.

How To Use Homemade Bone Broth

With that in mind, here are some ideas for incorporating this “liquid gold” into mealtimes.

Recipes that incorporate either chicken broth or beef broth:

Of course, this is not a complete list, but it’s a pretty good starting point.

What To Buy When You’re Short On Time

Although I make homemade broth when I can, I always keep a few containers of Kettle & Fire bone broth on hand to save time (and sometimes my sanity). It’s come in handy more than once when I needed to get something on the table quick, and also to make up “feel better soup” for my littles when they wake up not feeling well and I don’t have broth ingredients. 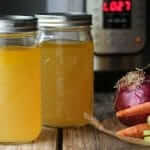 This Instant Pot bone broth recipe is just about as easy as it gets, and it's the perfect way to make use of bones from a leftover roast chicken, beef bones or pork bones.
Calories 69kcal
Author Heather Dessinger

Why don’t you include chicken feet?

Including chicken feet creates a broth with an intense gel due to the additional boost of gelatin, hyaluronic acid and other components. However, incorporating them requires some additional prep, like blanching the feet and removing the outer membrane before cooking them. Since my goal with this recipe is to show you a super easy and quick way to make bone broth, I decided to leave this more intensive step out.

Can I freeze bone broth?

Yes, you can! I used to store mine in wide-mouth mason jars using this method: After straining the broth, I’d pour it into the jars and leave a 1.5 inch (or more) gap at the top of the jar. That way when the liquid expands slightly and the glass contracts slightly, there’s a little “give.” Next, I’d allow the broth to cool completely in the fridge before transferring to the freezer.

These days, though, I allow the broth to cool and then pour it into extra large ice cube trays that are set on top of a baking sheet (which makes the trays easier to walk to the freezer without spilling). Once frozen, I transfer the cubes to a parchment-paper lined plastic bag that I reuse over and over for each new batch of broth.

How long does bone broth last in the fridge?

If your chilled jar of broth has a layer of fat on top that hasn’t been punctured, it forms a seal that can extend shelf life – some say up to six months. I’ve never left it in that long (and probably won’t), but I have left it for at least a week. Once the seal has been punctured it should last about 3-4 days.

How long does bone broth last in the freezer?

Instant Pot Chicken Soup Recipe – Chicken soup is one of my favorite comfort foods for fall. This rich version from Dr. Karen Lee’s Instant Pot cookbook is so flavorful and easy!

Pressure Cooker Whole Chicken – This “roast” chicken is one of my favorite IIP recipes. It’s so tender, and I can have it on the table with broth already bubbling away in less time than it used to take me just to roast the chicken.

Instant Pot Pulled Pork – This Texas-style pulled pork can be made in a slow cooker or Instant Pot – instructions for both are included in the post!

Instant Pot Spaghetti Squash – Spaghetti squash is Nature’s version of noodles. When pulled apart with a fork, the flesh naturally separates into pasta-like strands that are gluten-free, low-carb, and high in antioxidants. Because it has a mild flavor, it can easily be used as a substitute for pasta or rice in casseroles and other comfort foods.