The origin story of most of our favorite comfort foods is usually a little bit of a mystery, but not so with the massively popular Mississippi pot roast. It can be traced back to Ripley, Mississippi, a town with a population of about 5,300 that’s known as the birthplace of the hill country blues.

More specifically, it can be traced back to Robin Chapman, who adapted a recipe given to her in the 1990’s so that it would be less spicy for her kids. They loved it so much she shared with with a friend, Karen Farese, who contributed it to her church’s cookbook. The rest, as they say, is history.

Originally made with just five ingredients – roast, butter, ranch seasoning, au jus gravy mix and pepperoncinis – it was just called “roast beef” in the beginning. But with it’s melt-in-your-mouth tenderness and tangy, rich flavors, it’s no surprise that the recipe caught on, and as it made its way to fame it became affectionately known as the Mississippi pot roast.

The version below is made without seasoning packets, which often contain ingredients like artificial flavors and gluten that I want to avoid. Even when made from scratch, though, it’s a delicious homestyle dish that’s mostly hands-off and easy enough for busy weeknights.

Serve it up with mashed potatoes (or cauliflower fauxtatoes) and a side of veggies or a big salad. 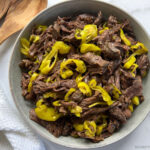 Can this recipe be made in a slow cooker?

Yes, you can add the roast, broth, coconut aminos, pepperoncini juice and DIY Ranch Seasoning Mix to slow cooker and cook on low for 6-8 hours (or until fork tender). I don’t sear when I use the slow cooker so there’s no need for the oil. If you’d like you can add the pepperoncini’s on top of the roast before it cooks. I prefer to add them after because they tend to get very soft if they cook for a long time.

When the roast is done, you can prepare the gravy using the DIY Au Jus ingredients on your stovetop.

No-Thaw Taco Meat – Infused with spices like cumin and chili powder, this recipe is so simple and delicious. You don’t even need to thaw the ground beef before tossing it into the Instant Pot.

Teriyaki Chicken – With a sticky, sweet and savory sauce and tender chicken, this recipe makes a delicious and easy meal.

Chicken Soup – This nourishing version of a tried-and-true comfort food is so flavorful and easy!

BBQ Pulled Pork – Juicy and flavorful, this tender pulled pork is delicious on its own or served as a sandwich with a side of coleslaw.