Quick, when I say “roses” what’s the first word that comes to mind for you? Is it Vikings? No? Well, let me tell you a story.

According to Nordic folklore, Viking raids were fueled by the fruit of the rose plant, which is loaded with vitamin C and other compounds that support immunity, vitality and well-being.

Excavation of Viking sites confirms that they did use herbs including rosehips and meadowsweet as both food and medicine, and for good reason. Aspirin was first derived from meadowsweet and willow bark, and rosehips have been used therapeutically since at least the first century in Rome. (1) (2) (3)

So what are the benefits of rosehips, and how can they be used to make tea, jam, syrup and more? We’ll cover all that below, but first I want to mention that none of these statements have been evaluated by the FDA, this article is not medical advice, and it is not meant to diagnose or treat any condition. Please talk with your healthcare provider about any herbal remedy or supplement you are considering.

Now that we’ve got that out of the way, let’s dive in!

Aside from the thorns, pretty much every part of the rose plant is used therapeutically – petals, inner bark, leaves and of course the fruit (hips), which have a mild, tart flavor similar to crab apple.

There are literally hundreds of species of rose plants, but the first to be mentioned for its therapeutic benefits is the dog rose (Rosa Canina). It gets its name from Pliny the Elder, who noted that it was used by Gallic tribes to support recovery from dog bites.

The two main rosehip varieties that are used therapeutically today are Rosa canina (known as Common Rose, Dog Rose, Briar Rose, Hip Tree) and Rosa rugosa (Japanese Rose). Most of the available studies focus on them, but there is also research showing that Rosa gallica (Apothecary Rose) is beneficial as well. (4) (5) (6) (7)

Also known as hip fruit, rosehips grow in late summer/fall and range in color from red/orange to deep purple/black. They can be eaten cooked or raw, and used to make jam, tea, soup, wine, and even mead (a traditional Viking preparation).

Rose hips are an excellent source of vitamin C and the entire vitamin C complex – in fact, they contain up to sixty times the vitamin C of citrus fruit, along with bioflavonoids that aid in the absorption of vitamin C. ” – Adaptogens in Medical Herbalism (8)

Though most famous for their high concentrations of vitamin C, rosehips are also rich in a variety of therapeutic compounds including:

Fresh rosehips are higher in vitamin C content than cooked or dried rosehips, but the dried and cooked versions have their own gifts. For example, while heating rosehips to make tea or syrup will decrease the vitamin C content, it makes the lycopene found in rosehips more bioavailable.

Dried rosehips are more concentrated than fresh and have demonstrated therapeutic benefits in many studies, as we’ll discuss below.

Rose hips were used both cooked and raw, as food and medicine, before the word vitamin was coined.” Edible and Medicinal Plants (9)

Thanks to their high vitamin C content, “rosehips were used in Great Britain during World War II to prevent scurvy when there was a shortage of citrus fruit.” (8)

Rosehips are useful for more than just meeting minimum nutritional needs, though. Here are some of their top benefits.

We know that excessive amounts of free radicals – which our bodies produce as byproducts of metabolism – cause oxidative stress that can lead to accelerated aging and several disease processes.

Fortunately, as this Live Science article puts it,

Collagen makes up about 75% of the dry weight of our skin, so it’s no surprise that it plays a huge role in supporting resilience, suppleness, elasticity, and hydration. (10)

Astaxanthin in particular seems to slow breakdown of the collagen we already have, while other antioxidants such as lycopene support resilience against UV light. (11) (12) (13)

Rosehip oil, which can be applied directly to skin, contains a derivative of vitamin A called trans-retinoic acid. If you’re not familiar with the benefits of topical vitamin A for skin, one worth mentioning is that it stimulates collagen production. (14)

However, unlike other forms of topical vitamin A which can be irritating, rosehip seed oil is rich in essential fatty acids that make it gentle enough for all skin types, even acne prone and very sensitive skin. (15) (16)

I use pure, cold-pressed organic rosehip seed oil to make my skin repair serum and I love how it feels on my face. Research suggests it may also help with evening skin pigmentation in certain types of scars. (17)

Studies suggest that rosehip powder can have a positive influence on biomarkers of cardiovascular health such as serum cholesterol and blood pressure. (8) (18)

Researchers have found that it supports the production of nitric oxide, which helps to relax the inner muscles of blood vessels so they can widen. (19)

Fresh rosehips support a resilient and balanced immune system in a couple of different ways.

First, they contain high concentrations of vitamin C, which supports “various cellular functions of both the innate and adaptive immune system.” (21)

Our bodies don’t make vitamin C, so the only way to optimize levels is through dietary intake.

Also, rosehips are rich in polyphenols, which support the production of key immune cells that help resist pathogens. As we’ll dive into later, they also promote a healthy gut microbiome, which is vital for healthy immune function.

While inflammation – and unfortunately the pain that comes with it – can be our friend in some cases of acute injury, our bodies rely on antioxidant compounds to help us clear it away when it no longer serves us.

Several forms, including water extracts (aka tea), alcohol-based extracts (aka tinctures) and dried rosehip powder have been found to be beneficial. (24) (25)

Sometimes called our “second genome,” our microbiome has a huge impact on brain function, mood, immune function and so much more. Most of it lives in our digestive tract, and in general diversity is considered a marker of health.

They’re rich in pectin, which is a naturally occurring polysaccharide that is indigestible to us but a preferred food of the bacteria in our gut. According to Stanford microbiologist Justin Sonnenburg:

The safest way to increase your microbial biodiversity is to eat a variety of polysaccharides.” (26)

The pectin in rosehips also makes it ideal for whipping up into homemade jam. (Recipe coming soon.)

According to Rosalee de la Foret, author of Alchemy of Herbs, “One of the most common reported uses of roses across North America was for diarrhea. Herbalists commonly use plants that are astringent for helping to heal wounds, and the rose is a reliably astringent plant. This tissue-toning property helps to mend skin or address tissues that have become too lax, such as when . . . excessive diarrhea has made intestinal tissues lax.”

Modern research supports this traditional use, and on the flipside it’s also considered helpful for cases of mild constipation. (28)

How To Use Rosehips ^

Rose petals and rose hips are a food and can be eaten in foodlike quantities. Studies showing medicinal benefits of rose hips have used dosages anywhere from 5 grams to 45 grams per day.” – Alchemy of Herbs (29)

Both fresh and dried rosehips are perfect for making tea, syrup, jam, infused vinegar, tincture and more. I’ve included recipes for rosehip tea below – keep an eye out for more recipes in future articles.

Dried rosehip powder can be added to smoothies or stirred into homemade coconut yogurt.

Also, cold-pressed rosehip oil is highly nourishing for skin and can be used solo or in a facial oil blend like this one.

When brewed in water, the beneficial compounds in rosehips are best extracted through a long simmering process known as a decoction. The tea is refreshing, slightly tart, lightly floral, and delightful to sip.

Add the water and rosehips to a small pot or teapot. Bring water to a boil, then reduce heat and simmer gently for 10 minutes. Strain out rosehips, sweeten if desired, and serve.

Note: As I mention in the safety section below, the seeds found in fresh rosehips and dried whole rosehips are covered in tiny hairs that irritate the mouth and throat. I recommend using deseeded dried rosehips in this recipe, but you can also use fresh or whole dried ones as long as you strain through a paper coffee filter before serving.

Do rosehips have any side effects? ^

According to the Botanical Safety Handbook, 2nd edition, it’s a Safety Class 1A herb – the safest rating possible. It is described as:

However, the handbook notes that small hairs found on the seeds of fresh and dried rosehips can irritate the mouth, throat and/or other areas.

These hairs are usually removed during processing, so they’re not something you need to worry about if you’re buying deseeded dried rosehips, rosehip powder, etc.

Whole dried rosehips will have some hairs on the inside of the fruit alongside the seeds, but they can be used in liquid herbal preparations as long as you strain them well.

Anytime I post about the benefits of a particular herbal tea I’m sipping on, I usually get a lot of comments like “Love that herb so much but seriously TELL ME ABOUT THAT TEAPOT.”

Here’s a list of my top five favorites, including a few that are stovetop safe. 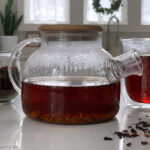 Note: As I mention in the safety section below, the seeds found in fresh rosehips and dried whole rosehips are covered in tiny hairs that irritate the mouth and throat. I recommend using deseeded dried rosehips in this recipe, but you can also use fresh or whole dried ones as long as you strain through a paper coffee filter before serving.

2. Desborough, Michael and Keeling, David (2017) The Aspirin Story – From Will To Wonder Drug

22. Hussain, Tarique (2016) Oxidative Stress and Inflammation: What Polyphenols Can Do for Us?

25. Cohen, Marc (2012) Rosehip – an evidence based herbal medicine for inflammation and arthritis

Prev Post Best of The Blog In 2021
Next Post What Are Ear Seeds? Auriculotherapy Benefits + How To