There’s something wonderful about a pudding (like this chia seed pudding recipe) or custard’s texture. Creamy, sweet, and smooth — a perfect combination! This gluten-free custard tart recipe is no exception.

What is a Custard Tart?

A custard tart consists of a pastry crust filled with a sweetened custard filling. Custard tarts were popular during medieval times in Europe. There is evidence of custard tarts from as early as the 14th century. Recipes from this time consisted of a puff pastry filled with custard.

Where are Custard Tarts From?

Custard tarts were a staple of the British during the Middle Ages since eggs were an easy source of protein that could stretch when made into a custard. But even the rich ate custard tarts. King Henry IV’s coronation banquet served them. While custard tarts are best known as a classic British dish, other countries have their own versions.

Custard tarts are so versatile, it makes sense that there are many versions of them!

How is a Custard Tart Different From a Quiche?

Both are made with a pastry crust and an egg custard filling, but they are two very different dishes. The main difference between a custard tart and quiche is simple — a quiche does not contain a sweetener, while custards (even the savory ones) do. Another difference is that quiches are usually made in wide shallow dishes and are meant to be cut to serve. Custard tarts are traditionally made in small deep dishes meant to serve one.

How Do You Make a Custard Tart Healthy?

Traditional custard tart ingredients include wheat flour and sugar, both of which my family usually avoid. To make a healthier version I made some adjustments:

Do Custard Tarts Need to Be Refrigerated?

Custard tarts are traditionally served at room temperature. For storage purposes though, refrigeration is a good idea. 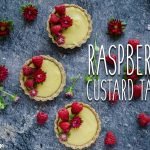 These little tarts are rather time consuming to make, but they can be made in advance and refrigerated until serving.

If you want more creamy, dreamy desserts, try some of these: